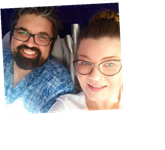 What can we say about Amber Portwood that hasn’t already been said in a police report?

Amber was arrested back in July for brandishing a machete and pummelling her then-boyfriend, Andrew Glennon, while he held the couple’s 1-year-old son, James.

Obviously, all of that is almost unimaginably monstrous.

But this is Amber we’re talking about, so that’s just the tip of the iceberg of abuse.

In the weeks that followed, several audio recordings surfaced in which Amber could be heard physically and verbally abusing Glennon.

But hey, it’s not like she ever fantasized about him getting gang-raped in front of his son, you might be saying to yourself.

To which we say, Hold on there, Oddly Specific Hypothetical Reader. As it happens, Amber did that very thing!

At this point, we think it’s safe to say that Andrew has made his case.

It’s reached the point where Teen Mom fans are begrudgingly admitting that Amber might be worse than Jenelle Evans, which is really saying something.

But abusers don’t deserve a moment’s rest, so we’re 100 percent here for Glennon raking his ex over the coals, even for lesser incidents like her weird flirtations with Uber drivers:

In a lengthy tirade, Andrew recounted the incident on Instagram this week:

“Today I had a flash memory that makes me hurt and feel nauseous,” he told fans.

“After having an endoscopy (camera down your throat to see into your stomach) to make sure I was cancer free, she showed up in an Uber [because] I wasn’t allowed to leave [by] myself,” Glennon wrote.

“I was still pretty out of it, trying to fight the urge to throw up from the medication, but the whole trip back she was totally flirting with [our Uber driver] who says he’s really a cook and only Ubering as a side gig,” he explained.

With Amber stories, it’s a safe bet that it’s just gonna keep getting worse, and that’s definitely the case here:

“She decides to give this weird guy her phone number right in front of me,” Andrew continued.

“When home, I said, ‘I can’t believe you did that to me. That was horrible to watch,'” he wrote.

“Her response was, ‘What type of man are you to LET your girlfriend give her number to another man?’

“This is the type of emotionally damaging manipulation I had to endure. How does your life partner or ‘soulmate’ treat you?” Andrew recalled.

Reflecting on his mindset in those days, Glennon later added:

“I became numb to the attacks for [the] sake of survival.”

Of course, that’s our reaction to pretty much every story involving Amber.

In case you’re wondering, Amber still hasn’t been fired by MTV, but that might change pending the outcome of her domestic violence trial.