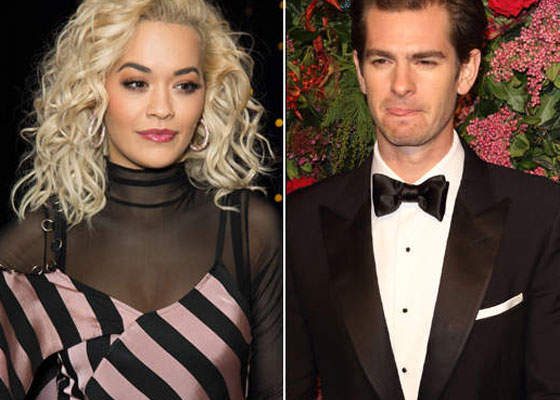 Rita Ora is the queen of doing basically nothing but still getting invited to everything. Have you ever heard a Rita Ora song that she wasn’t a feature in or featured people way more relevant than her? Didn’t think so. Yet homegirl still gets invited to the MET Gala and shit! Well, Rita needs to keep her Queen of Showing Up career alive because those Rimmel London ads aren’t worth nothing without a bit-o-tabloid publicity. So now, it’s being reported that she’s dating former Spider-Man Andrew Garfield.

Vestige of truth and justice, The Sun, is reporting that 28-year-old Rita and the 35-year-old (What! He looks thirteen!) Andrew are in the beginning stages of a relationship. This is following Rita’s break-up from her music producer Andrew Watt back in September.

The Sun has a close source to the singer who said all this:

“Rita let slip to pals about her brewing romance about a month ago… But in recent days things have started to heat up and she says what they have is the real deal… It is still very early days but they like each other and are seeing what happens… Their schedules make things difficult but they have a real connection.”

Those schedules include Rita Ora releasing a new album last week so I’m not overly shocked there’s a dating rumor circling now. Methinks what’s heating up here is Rita’s promotional tour and need to make a dollar. Nothing helps sell an album like people going:

“Who’s Rita Ora? Honey? Honey? Who is Rita Ora? This tabloid says she’s dating Andrew Garfield. Was he that Spider-Boy? He is so cute!  But who is she?”

“What does she sing?”

You gotta do what you gotta do to get those album sales, even if the “do” involves your publicist pulling a random name out of a hot filled the random names of famous men and then starting a rumor that you’re dating him.