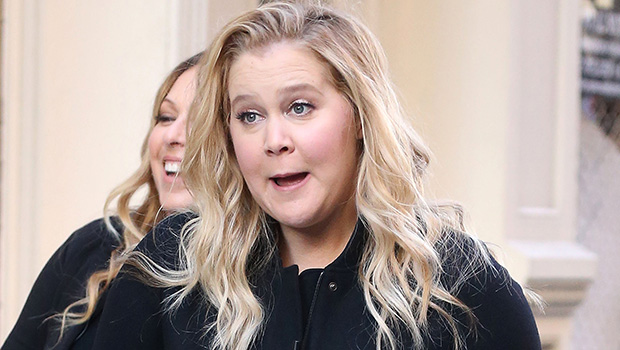 Poor Amy! The actress and mom-to-be was so sick on Christmas Day, that she had to pull over to the side of the road to puke. She even shared a video of the moment, and we’ve got it here!

Amy Schumer, 37, has a bun in the oven, but on Christmas day, the mommy-to-be experienced some serious morning sickness! The actress was out and about with her hubby, Chris Fischer, when they had to make an emergency stop. Amy had her man pull over to the side of the road, because she had to vomit. Amy, who was wearing a navy blue puffer coat, and striped pajama pants, let it all out, but thankfully, on the remote tree-lined road, there was no one watching.

There’s no shame in Amy’s pregnancy game, and she was actually the one who posted the video! Amy wasn’t shy about sharing her puke-filled Christmas experience with her Instagram followers. “And so this is Christmas,” the actress captioned her post, with a Christmas tree emoji at the end. The slideshow post also included a picture of her husband, their two dogs, and a box of cheez-its patiently waiting for Amy in the car. In another picture from Amy’s post, she can bed seen laying on the floor, taking a load off, surrounded by her animals. It looks like Amy is having one tough time with her first pregnancy experience!

It was this past October that we first learned that Amy was pregnant! Fans realized that the couple were growing their family less than a year after their wedding ceremony, when her friend spilled the beans on social media. Yep, she had her best friend make the announcement for her! Her friend, Jessica Yellin, shared a screenshot of congressional and gubernatorial candidates to vote for, but at the end, the post simply read: “I’m pregnant – Amy Schumer” So sneaky!

And so this is Christmas ?

And so this is Christmas ?

We’re so happy for the cute couple and can’t wait for Amy’s bundle of joy to arrive! We just hope her morning sickness gets a little better before then.