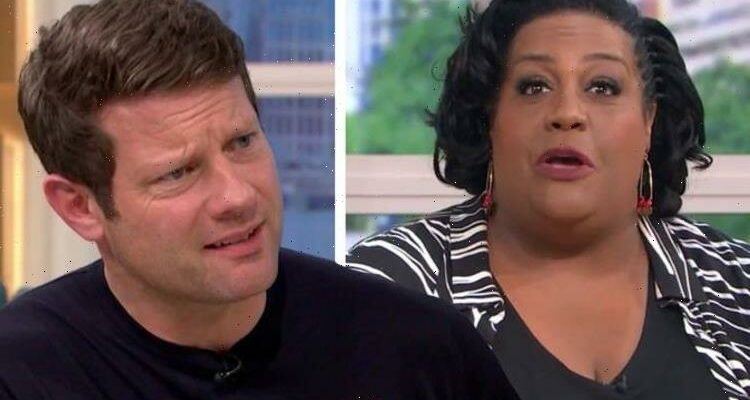 This Morning viewer assists Alison Hammond behind the scenes

Alison Hammond, 46, and Dermot O’Leary, 48, have become one of daytime TV’s favourite duo since they took over Ruth Langsford and Eamonn Holmes’ This Morning post earlier this year. And while Covid made it rather tricky for them to win over viewers at the beginning, they’ve certainly got into the swing of things now.

He just wants to be glued to me!

But there’s parts of the coronavirus rules that Alison admits she would like to remain on-set, such as social distancing.

Nothing to do with the virus per say, but rather a personal preference.

While the pair get on like a house on fire after being flung into the deep end presenting one the the UK’s biggest daytime shows, she confessed there’s just one thing that bothers her about her “on-screen husband”.

“He just wants to be glued to me!” Alison laughed in a recent interview.

“I quite like the two-metre rule because I look better at a distance.

“I normally love the way I look, but I sit next to Dermot and think, ‘B****y hell, I’m massive compared to you.’

“So I want him to stay over there because now we are able to stand closer together, it’s obvious how big I actually am.”

She chuckled: “I could put him in my pocket!”

The TV star recently opened up about her weight and how she got rid of her gastric band after two years as she “wasn’t ready” for the drastic impact it had on her eating habits.

Elsewhere, she went on to discuss the difficulties she and Dermot ran into during the beginning on their TV partnership, one that was immediately met with a backlash from viewers.

Having not seen each other for 15 years, she described the pairing as an “arranged marriage”.

“Because of Covid, there were no screen tests. No lunch. Nothing,” she told The Sun’s Fabulous magazine.

“We literally did a Zoom and we couldn’t even get that right.

“Then we spoke on the phone briefly and it was just: ‘OK, I’ll see you on Friday then.’”

In a recent interview with the same publication, Dermot admitted the duo had had a “frank exchange” off-air, but it was a turning point in their working relationship and friendship.

“We are so honest with each other now,” Alison agreed.

She added: “It’s the little things, nothing major.

“For example, he steals my lines and he doesn’t keep up to speed with my life on Instagram even though we host a show together!” she laughed.