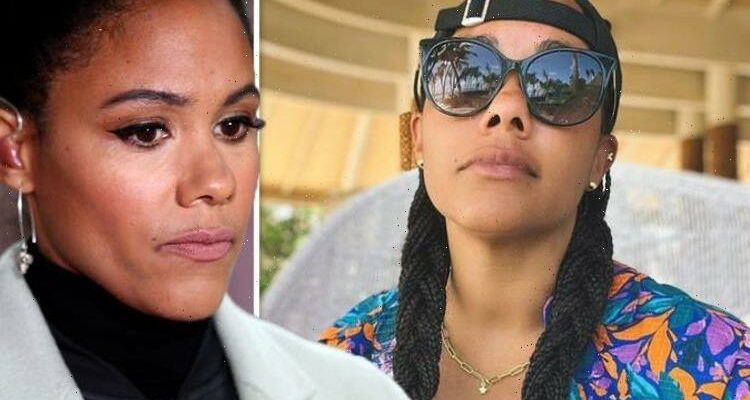 Alex Scott gets stuck in dress after 2021 Fashion Awards

BBC Sport reporter Alex Scott has been forced to defend her beach attire as she soaks up the sun during an idyllic holiday in the Maldives. The Football Focus host, 37, hit back at a social media user who questioned her fashion choices after Alex posted a series of snaps of herself making the most of her time in the sun.

I never get why people wear caps back to front

In view of her one million followers, the former Arsenal footballer shared an insight into her idyllic holiday.

The star accompanied the caption with stunning snaps as she posed for the camera in the Maldives.

The star posed playfully for the snaps, sporting minimal make-up during her time away and plaiting her hair into two braids.

Alex finished her look with a series of ear piercings, a gold necklace, and black nail varnish.

However, the star was quick to defend her ensemble after a social media user took issue with her headwear.

Instagram user rockett155 wrote: “I never get why people wear caps back to front in Sunny climes, have a great time.” (sic)

Upon spotting the comment, Alex instantly explained the reasoning behind her fashion choices.

Alongside a laughing face emoji, Alex wrote back: “Well I’ve got my sunglasses for the sun and the hat keeping my frizz at bay for the time being.”

The Instagram user replied again: “@alexscott2 go girl, the Maldives are so lovely this time of year.”

Previously, the former footballer’s holiday ensemble sparked questions once again, as she posted several pictures of herself wearing sunglasses while swimming in her private pool.

A curious fan then asked why Alex had kept the eyewear on, following her Instagram post from last week.

“Really… I mean if you’re in for a quick dip I always keep them on, it’s not like I’m doing laps of the pool. Now that’s a different story,” Alex wrote back.

Hoards of the BBC broadcaster’s celebrity friends also rushed to comment on her vacation snaps.

Pundit Ian Wright commented: “Take it to the max Al. #liveandloveyourbestlife,” followed by a red heart.

Days ago, the sports journalist told how she was “getting her glow back” after taking a step away from her TV duties.

Alex previously admitted she needed to “completely switch off”, leading her to jet off to the exotic location.

The presenter has been keeping her fans updated during her holiday getaway after posting a series of stunning bikini snaps.

Alex told how her mum said that she had “got her glow back” after video calling her from the island.

Alex responded: “My reply is because I’m on the ‘island of joy.’ That’s the meaning behind the name of the island by the way,” before assuring fans that she hadn’t made it up.