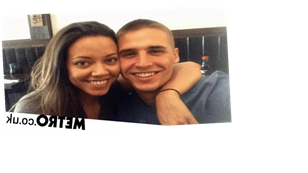 Actor Hagen Mills mistakenly believed that he had shot his ex-girlfriend dead when he turned the gun on himself, it has been claimed.

The 29-year-old died on Tuesday in what was believed to be an attempted murder-suicide, with the Baskets star shooting his ex Erica Price in her Kentucky home.

And Ms Price’s mother has revealed she believed Mills was going to kill her too, after he tied her hands with duct tape.

Speaking to the Daily Mail, Tammy Green-Price claimed that Mills was ‘obsessed’ with her daughter and was ‘stalking her’, following their split two years ago.

Ms Green-Price had been babysitting Erica and Hagen’s four-year-old daughter when Mills arrived at the house, holding a gun.

After tying up Ms Green-Price, the actor waited for 30 minutes until his ex arrived, and begged her to get back with him.

However, Mills grabbed her phone and looked at it, flying into a rage, and fired two shots at Ms Price.

Ms Green-Price said: ‘I think he believed she was dead, as soon as she hit the floor he shot himself.’

She continued: ‘I thought I was next. But the baby was behind me and my only real thought was to shield her.

‘I somehow managed to nudge her down on the couch then closed my eyes and prepared to die.

‘I heard the gun go off, I heard his body hitting the floor and I finally opened my eyes and realised I was alive.’

Erica had managed to drag herself into a bedroom to call 911, and while she was shot in the arm and had a bullet lodged in her chest, she is recovering in hospital, although is in isolation due to the coronavirus pandemic.

A GoFundMe has been set up by friends to help pay for her medical bills, which reads: ‘By now most of you are aware of the tragedy that took place on Tuesday May 19th, 2020. Erica Price was involved in an incident entirely out of her control and the results of that incident left Erica with injuries  that needed immediate and ongoing medical treatment.

‘Erica has a small child to support, as a single mother. She will likely accumulate a series of expensive medical bills, and at this point it is unlikely she will return to work anytime soon. If you are able to help financially, I know she would be forever grateful. If you are unable to contribute financially, then please continue to send your prayer, as Erica has a long road of recovery ahead of her.’

On 30 March, he was arrested and charged with first degree rape, sodomy and kidnapping.

He was accused of having an altercation with a woman outside his home, before dragging her inside where he allegedly kept her captive for 10 hours and raped her.

Mills was best known for appearing in the FX series Baskets, by Zach Galifianakis and Louis CK, in 2016, and also had roles in Swedish Dicks and Bonnie & Clyde: Justified.

He also has a role in the upcoming indie horror Star Light, which is set for release in August.