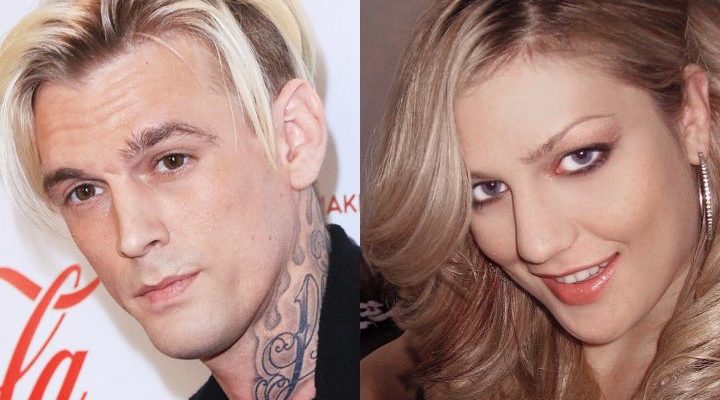 Just days after his brother Nick Carter filed for a restraining order against him, the ‘I Want Candy’ singer turns to Twitter to make the shocking confession about their sister Leslie.

AceShowbiz –Aaron Carter has accused his late sister of raping him when he was 10.

The “I Want Candy” singer made the sensational accusation in a Twitter rant posted just two days after his brother Nick Carter and sister Angel filed for a restraining order against him, claiming they feared for their lives following Aaron’s “increasingly alarming behaviour” and alleged gun threats.

The youngest Carter, who is estranged from his siblings, insisted he’d never threatened the lives of his family members, and now he has stunned fans and friends by alleging his late sister, Leslie, sexually assaulted him when he was a kid when she wasn’t taking her medications for bipolar disorder. Aaron recently confessed he too had been diagnosed, only to later backtrack and insist that wasn’t the case.

“My sister Leslie suffered from bipolar and took lithium to treat it,” he tweeted on Thursday, September 19. “She never liked the way it made her feel and when she was off of it she did things that she never meant to do I truly believe that. I was 10 years old. I have spent the last 15 years of my life going to therapy for abuse & rape…”

He added, “I feel cleansed all my truth is out I just need to focus now on my music my career and supporting all victims of abuse and rape.”

Aaron’s sister died from a prescription drug overdose in 2012 at the age of 25.

The singer recently confessed he had been diagnosed schizophrenic, while doctors also discovered he suffers from multiple personality disorder, manic depression and acute anxiety.

Earlier this week, September 17, he announced he’s cancelling the remaining dates on his U.S. tour to focus on his health.

Shortly after the news broke, Nick revealed he and Angel had filed for a protection order. A Twitter statement read, “In light of Aaron’s increasingly alarming behavior and his recent confession that he harbors thoughts and intentions of killing my pregnant wife and unborn child, we were left with no choice but to take every measure possible to protect ourselves and our family.”

Aaron fired back, accusing Nick of targeting him for supporting actress Melissa Schuman after she accused the Backstreet Boys singer of allegedly raping her in 2002. Nick has always maintained the sex they had was consensual.

“Hey love, @MelissaSchuman, I’m not sorry that I spoke to you. Clearly my brother is sorry I spoke to you and is retaliating against me.”

He also denied his brother’s claims he is a danger to himself and others, adding, “Anybody who knows me knows I wouldn’t hurt a fly.”

Nick Carter has yet to respond to his brother’s claims about late sister Leslie.