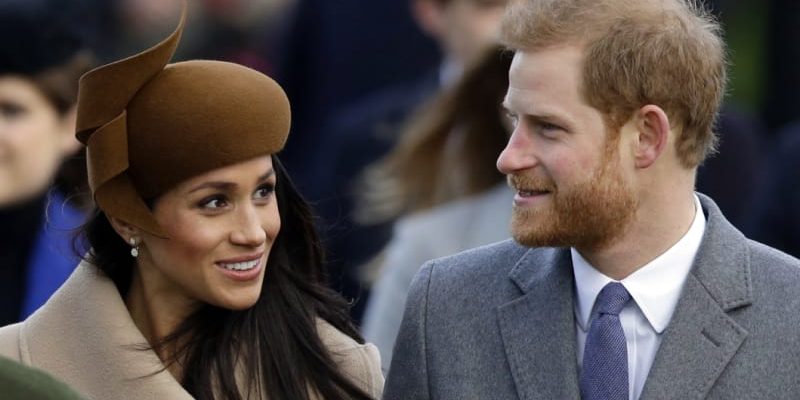 It's Christmas again, the time of year when British royals generally step up their round of good work and cheery public appearances before disappearing to private celebrations, far from prying eyes. This year is no different.

Routine is built into royal life, especially for senior royals such as Queen Elizabeth II and Prince Charles, the Prince of Wales, whose busy schedules are usually laid out for them months or years in advance. Each royal year has a certain rhythm: Easter at Windsor Castle, Trooping the Colour and Royal Ascot in June, the annual eight-week holiday at Balmoral in Scotland in late summer, Remembrance Day in November, and Christmas at Sandringham House.

For the past three decades, the Queen has hosted her sprawling family at her private estate in Norfolk for the Christmas and New Year holidays. There they exchange cheap gag gifts and sit down to a black-tie Christmas dinner on Christmas Eve. 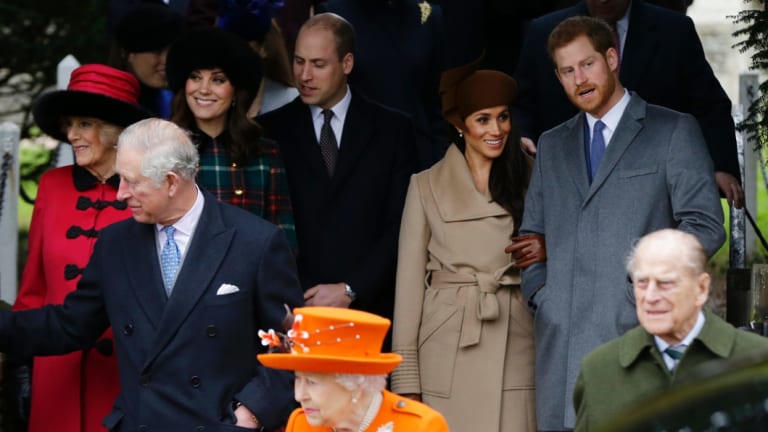 The royal family after the Christmas Day service St Mary Magdalene Church in Sandringham in 2017. Credit:AP

On Christmas morning, they have breakfast (the men go downstairs for a hearty "fry up," the women have something light served in their rooms, according to former royal chef Darren McGrady), then gather before 11am to walk to services at nearby St Mary Magdalene Church. They return for Christmas lunch and then gather around the TV to watch the Queen's annual Christmas speech to the nation and the Commonwealth.

(This is required viewing for the family as it is the only speech the Queen gets to write herself, without involvement from the government of the day. It used to be broadcast from Sandringham, starting with her grandfather in 1936, but now she usually records it ahead of time.) 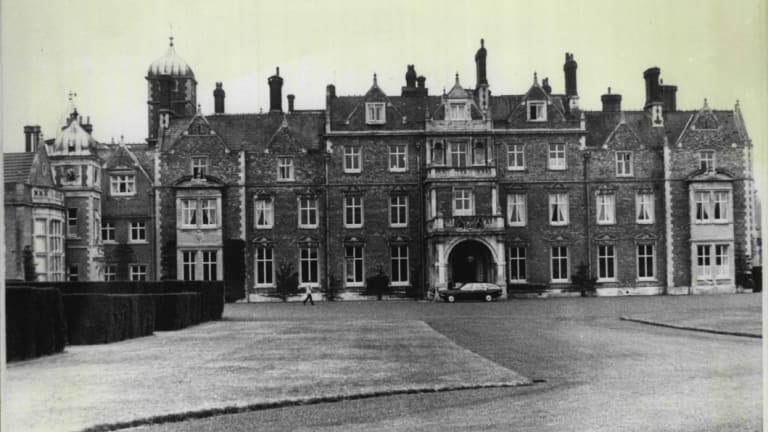 Why Christmas at Sandringham? It's a private country mansion, unlike Windsor Castle, some of which is open to the public. Sandringham is about two hours away by train from London and is relatively private. Other than an an organised photo shoot of the family walking to church, it keeps the media at bay.

Most importantly, Sandringham is much-loved by the Queen and her family, and both her father and grandfather died there.

Last year, Prince Harry and his then-fiancee, Meghan Markle, were among the walkers – an unprecedented honour for Meghan since she had not yet officially joined the family – their May wedding was still months away. 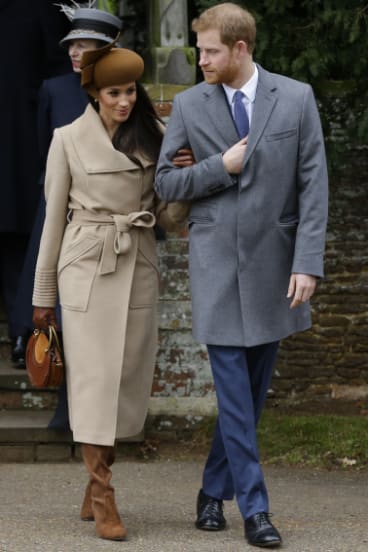 Sandringham estate is sprawling (8000 hectares) so it's also suitable for the annual Boxing Day pheasant shoot that Prince Philip has traditionally organised.

Last year, Harry skipped the shoot, reportedly to spare Meghan's animal rights sympathies, and he may be absent again this year. Harry's mother, the late Princess Diana, also loathed blood sports but, from boyhood, her sons have joined in enthusiastically.

Prince William, Duchess of Cambridge and their three children, Prince George, 5, Princess Charlotte, 3, and baby Prince Louis, have a country retreat, Anmer Hall, nearby on the estate, gifted to them by the Queen.  Last year, Harry and Meghan stayed with William and Kate at Anmer Hall. Sometimes, William and Harry play in a charity soccer match on Christmas Eve, pitting Sandringham staff and estate neighbours.

The Queen's other Christmas lunch

The week before Christmas, the Queen hosts a huge festive lunch for her extended family at Buckingham Palace, including those who will not be at Sandringham. Last year, Meghan was included – another sign of how quickly she was accepted into the family ahead of the wedding. Tradition reportedly dictates that the lunch is attended by only relatives and spouses.

This year, on December 19, Meghan was photographed smiling next to Harry as the two drove onto the palace grounds for this year's luncheon. Her sister-in-law Kate was also photographed arriving, with Prince George peeking through the back seat. 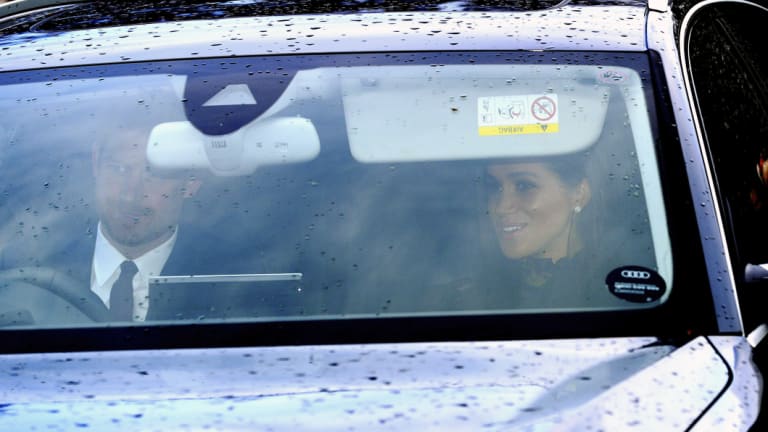 Prince Harry and Meghan, Duchess of Sussex, arrive for the Queen’s Christmas lunch on December 19.Credit:AP

After the lunch, the Queen and Prince Philip depart for Sandringham by train. Their routine was interrupted in 2016 when, the day after the lunch, Buckingham Palace announced they had postponed their departure because the two had "heavy colds". They were flown there by helicopter the next day.

Every year, Prince Charles and Camilla, Duchess of Cornwall, William and Kate, and now Harry and Meghan send out Christmas cards featuring family photos. This year, Charles and Camilla posed on a garden bench at Clarence House, their London home.

The Cambridges posed in the branches of a tree in the garden at Anmer Hall. Harry and Meghan chose a previously unseen black and white photo of themselves watching the fireworks at Frogmore House after their second wedding reception.

But it's the card from the Queen that counts. Every year, she and Prince Philip send around 750, usually featuring a family photo, to family, friends and members of the royal household staff, along with others such as British and Commonwealth prime ministers, governors-general and high commissioners. Prince Philip usually sends another 200 cards to different regiments and organisations with whom he's long been associated.

All members of the royal household receive presents from the Queen, who personally hands them out to some members of staff at Buckingham Palace and Windsor Castle. And, continuing the tradition from her father, King George VI, and her grandfather, George V, the Queen also gives out about 1500 Christmas puddings to her staff in the palaces, in the court post office and the palace police. Each pudding is accompanied by a greeting card from the Queen and Prince Philip.

The tradition of decorating trees at Christmas was popularised by British royals, specifically Queen Victoria and her German-born husband Prince Albert, both of whom had grown up with the custom. Her German ancestors introduced the idea to the English and her German mother continued it. By the 1860s it was a thing, with hundreds of trees being sold in Covent Garden. 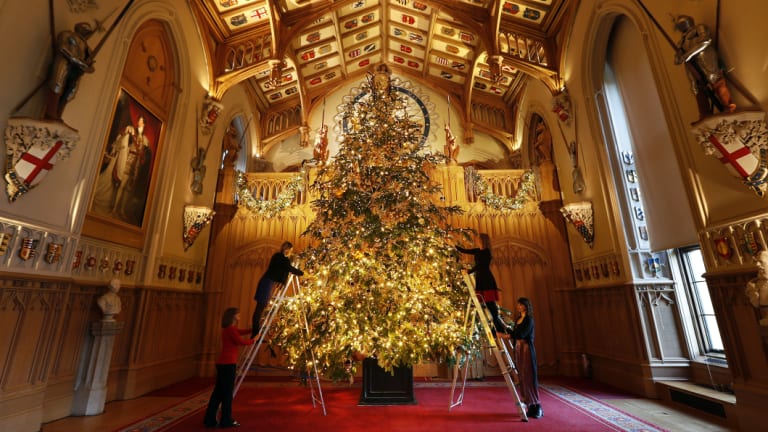 A six-metre-tall-tree being decorated in St George’s Hall at Windsor Castle.Credit:AP

As well as donating money to several charities in Windsor each Christmas, the queen also gives Christmas trees to Westminster Abbey, St Paul's Cathedral, St Giles' Cathedral and the Canongate Kirk in Edinburgh. Churches and schools in the Sandringham area will also receive a tree from Her Majesty.

Decorated trees go up at the London palaces, and at Sandringham there's a large silver artificial tree in the dining room decorated by the grandchildren and great-grandchildren, according to former royal chef McGrady, who dished about the tradition in an interview with Good Housekeeping.

William and Kate went to Cyprus to say merry Christmas to Royal Air Force families. First, on December 4, they hosted a holiday party at Kensington Palace for families whose loved ones are serving at a British base on the island. They collected gifts and letters from the children and the next day hopped on a plane to deliver them to the men and women based at RAF Akrotiri, where they attended another Christmas party for troops who will be away from their families throughout the holiday season. 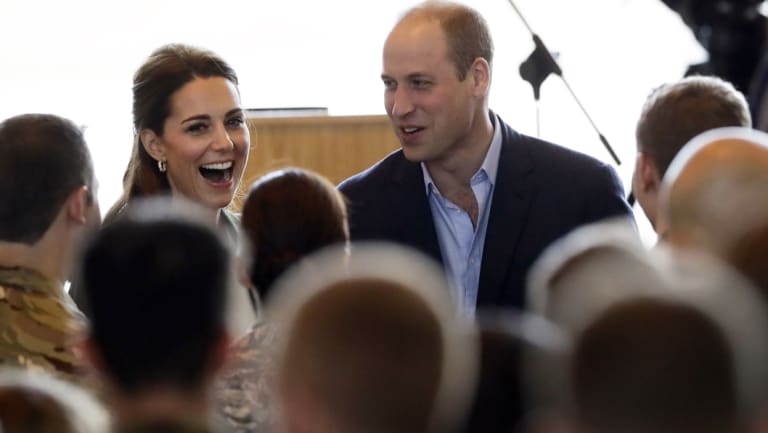 Prince William and Kate, the Duchess of Cambridge, greet personnel in the hangar at the Akrotiri Royal Air Force base in Cyprus.Credit:AP

The following week, the royal pair visited the Evelina London Children's Hospital, for which Kate is the new royal patron, and the homeless resource center the Passage, where they visited with children and staff in settings decorated for Christmas. In past years, Kate has also attended the annual Christmas party at one of her older patronages, the Anna Freud National Centre for Children and Families, a child mental health research, training and treatment centre in London. 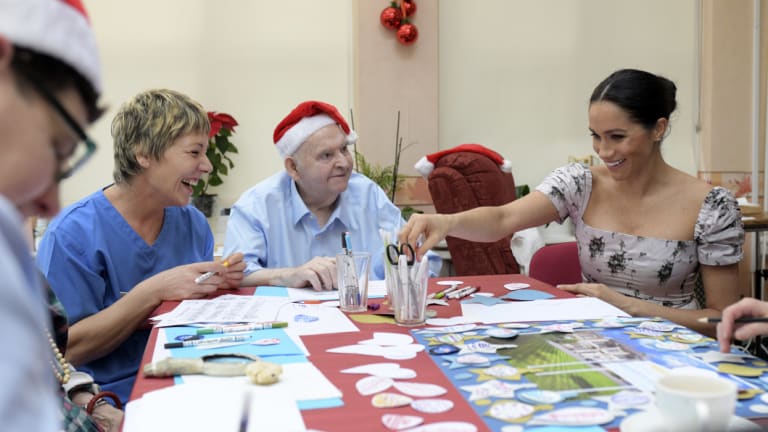 Meghan made a solo visit to the Royal Variety Charity's residential nursing and care home, Brinsworth House in London, on Tuesday to bring holiday cheer to three dozen residents, including singing carols around a Christmas tree. The Royal Variety Charity, of which the Queen is patron, may end up in Meghan's portfolio when the palace announces her royal philanthropic menu next year.

It's a good fit for her, as the charity helps take care of hundreds of retired entertainers who have fallen on hard times due to old age, illness or financial disaster. The charity is supported in part by the annual Royal Variety Performance in November in London, which Meghan attended this year with Prince Harry. 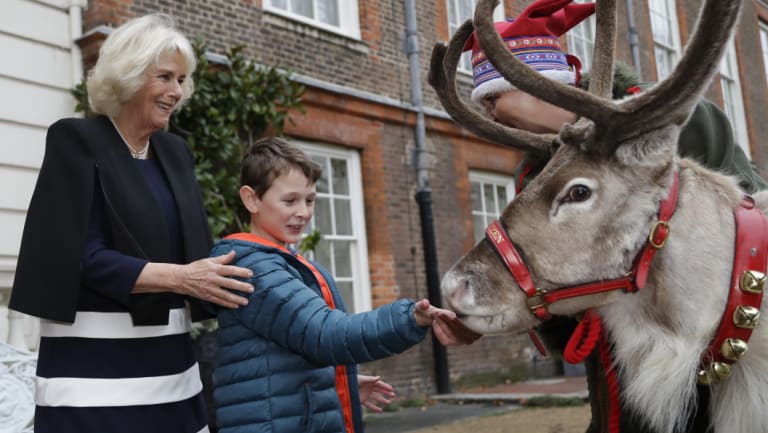 Camilla, Duchess of Cornwall, stands with one of the children invited to Clarence House.Credit:AP

Duchess Camilla of Cornwall is a big fan of Christmas. Every year in early December she hosts a children's lunch party at Clarence House in London where the kids help her decorate the palace Christmas tree.

"The tree decorating for me is always the start of Christmas," she told reporters the day of the December 6 party this year. "I haven't thought about it before today, but I come in and see the tree and the children and everything and it just gets me in a Christmas mood."

This year, she took some of the kids outside to meet two reindeer, Dancer and Blitzen, and their handler elves.For the past nine years, the children and families invited to Camilla's party have been beneficiaries of the Helen & Douglas House hospice and Roald Dahl's Marvellous Children's Charity, two organisations for which Camilla serves as patron. The organisations help support thousands of children with chronic illnesses.