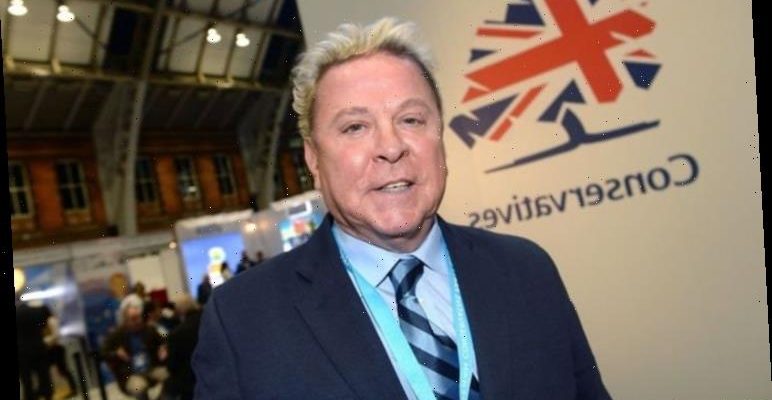 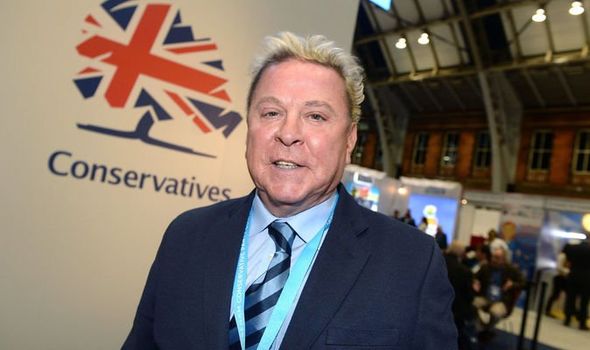 Yup! David Van Day, erstwhile pop star from Guys ’n’ Dolls and Dollar, Bucks Fizz, more recently a contestant on I’m A Celebrity… Flaxen-haired, maverick, now working the crowds like the pro he is – remind you of anyone? For this is a new chapter in the life of DavidVan Day. He has reinvented himself as an Homme Sérieux. DVD is now a politician, a proper one, for he is a councillor on Thurrock council in Aveley and Uplands Ward in Essex, where he lives with his second wife Sue Moxley.

And if you think slightly cheesy entertainers cannot achieve political high office, I have two words for you: Ronald Reagan.

Mark my words, it will be Prime Minister Van Day in no time.

You read it here first.

But there’s a greasy pole to climb on the way to Number 10 and it starts on a train journey to Manchester, where DVD will spend a couple of days meeting and greeting his people, the Tory grassroots and the Tory great and good.

Now, unbelievably 62, he is still instantly recognisable from those days in the moonlight and in fact quite a few people including some heavily armed policemen, recognise him.

Just about everyone wishes him well. 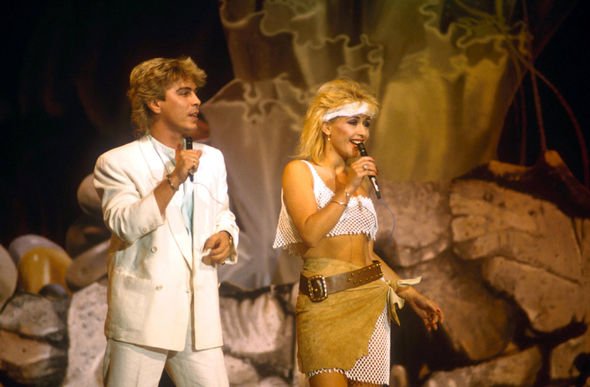 So what made him decide on a career in politics?

They say politics is showbusiness for ugly people, but DVD certainly isn’t ugly (a heart-throb at one stage, forsooth) and he’s already done showbiz.

“As a pop star I deal with nostalgia,” he says. “I perform with a lot of ’80s acts but I want to engage with now rather than looking back. I am very pro-Brexit. I like helping people, the Conservative Party has the values I share, and I wanted to engage with something real.”

Would he consider standing as an MP?

“It’s not out of the question.” 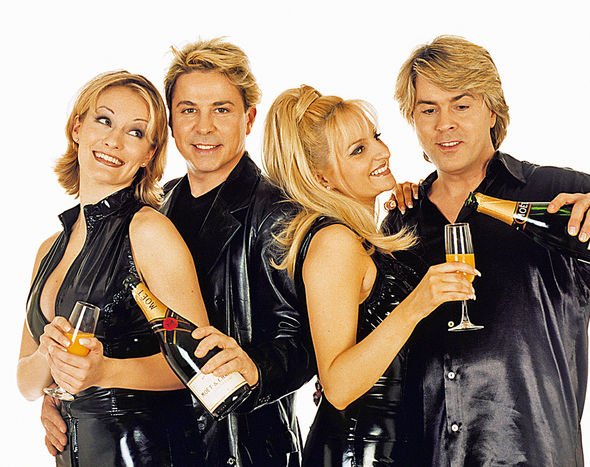 Mark my words, it will be Prime Minister Van Day in no time. You read it here first

It’s DVD’s first time at conference but as he points out, he’s had 40 years’ experience of dealing with the public and frankly, he’s a charmer with it.

“On the doorstep people ask if I’ll perform. I tell them if they don’t vote for me I’ll come back and sing to them.”

DVD is not averse to breaking into song: on the train there are a few sotto voce lines from the Guys ’n’ Dolls days, “a whole lotta loving going on”.

Margaret Thatcher is his political hero but was he interested in politics in his showbiz heyday, which actually coincided with hers?

“Nah. I was just interested in partying, sex and drugs and rock ’n’ roll,” which one gathers puts him right up there with about half the current big beasts in the Conservative Party.

No wonder he feels so at home.

We arrive at conference itself.

DVD glad-hands a few policemen and once inside is glad-handing right, left and centre.

Selfies are requested from the punters.

“Make me look short,” says DVD, who is a touch on the diminutive side.

All around us chaps are clapping one another on the shoulder and exclaiming, “Good man,” which is the default position of the Tory male when he can’t think of anything else to say. 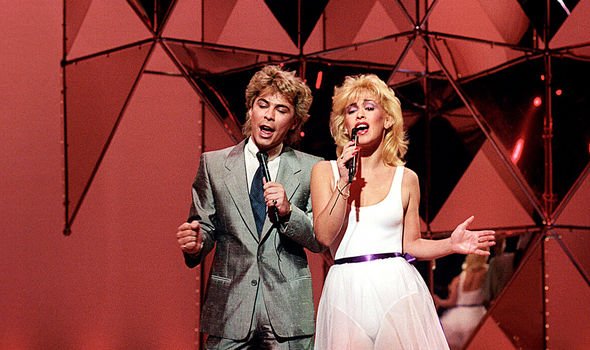 He catches up with a few of his fellow councillors.

Education Secretary Gavin Williamson, below, hoves into view and DVD is on to him like a heat-seeking missile.

We search for party chairman James Cleverly, but while we don’t find him, we score something even better.

The leader of Thurrock Council, Rob Gledhill, had been speaking to Cleverly, and guess who got a mention?

“James Cleverly? Mentioned me?” DVD is loving it.

It more than makes up for the fact that we agree that conference feels a little flat. 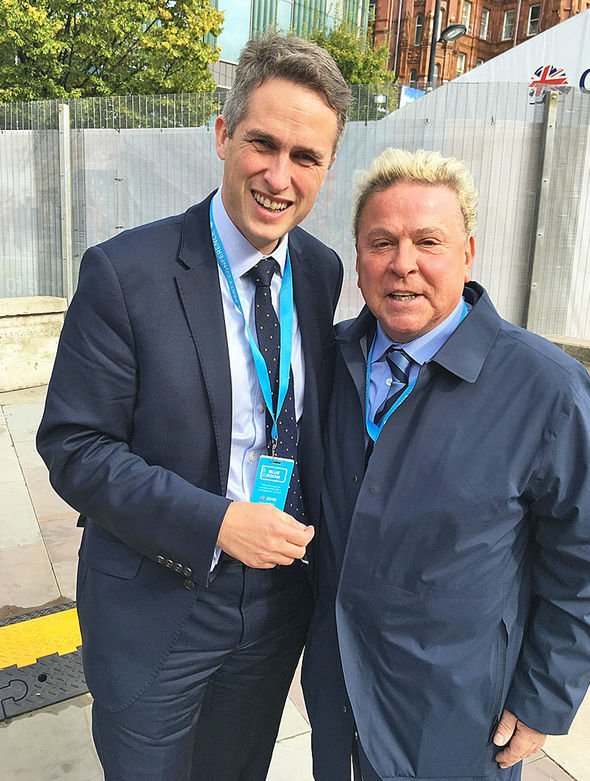 Most of the big beasts have returned to London to conspire against one another, although the biggest of the lot is to talk the next day.

“Where are all the drugs?”

He turns to me.

“He used to be a policeman and they have all the best drugs.”

Gledhill takes it in good humour and it’s pretty sporting of DVD to venture there for, as he himself reminds me, he was once caught taking cocaine, “and we were a kids’ act”.

Such shenanigans are practically de rigueur for high office these days.

Next up is the broadcaster and political commentator Iain Dale: “I’ve got all your music on my phone,” he tells DVD and then produces the phone to prove it.

DVD’s pleasure in this revelation is catching. 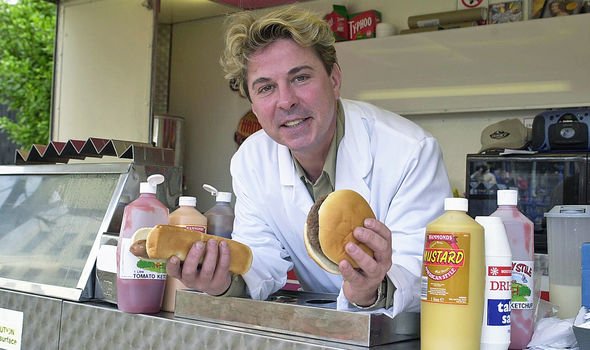 I almost call him a good man.

We cross the road to the Midland Hotel, which is where the real action is taking place.

DVD is more energised than ever but then, as he previously pointed out to me, he is actually a trained classical actor.

“Politics is just like showbusiness,” he says sagely. “You have to know your script and how to improvise.”

The rest of the evening passes in a bit of a blur.

The next morning I come down to breakfast where DVD is tucking in to the full English (as befits a man who once ran a burger van to eke out his showbiz earnings, he appreciates his trough bag) and we get ready to go to see Boris.

What does he think of the great man’s love life?

“He’s got a naughty glance in his eye,” says DVD, who in his youth was also known to do a fair bit of glancing. “He needs to learn to control himself.”

And what about the groping allegation?

Quite the new man.

We don’t get into the main auditorium for the speeches, so DVD goes to the councillors’ lounge, where he is served coffee and cake and I go to the Business Lounge, where I fare considerably better with cheese and champagne. 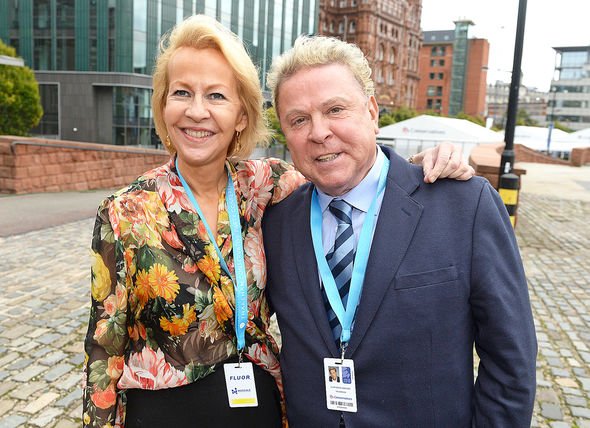 “It went very well, he was on fine form,” says DVD after the speech. “Lots of gags but he means business.”

Okay, cut to the chase.

What will DVD do when he becomes prime minister?

“I’ll make sure letterboxes are in the middle of the door, not the bottom. When you’re out canvassing, the lower ones cause your back to strain. They’re an absolute b*****. It’s a right old carry-on.”

That’s a good enough answer for me, but it’s followed by lowering taxes and encouraging entrepreneurs.

I clap him on the shoulder.

He’s a little sensitive about not having a very academic education and while he is adamant that he couldn’t regret his pop career, there is clearly a slight sadness that he didn’t have the serious acting career he originally planned.

The chance to break America vanished after an argument with his partner in Dollar, Thereza Bazar and there were a few wasted years.

Unlike the majority of MPs, DVD certainly has life experience and an awful lot of it.

He enjoys attention but he’s not arrogant.

He’s not perfect but who, apart from me, is?

He’s got my vote, for sure.