A day after he was taken into custody, the ‘Look Back at It’ hitmaker explains to his fans that he was sent behind bars for ‘something’ he was ‘accused of two years ago.’

AceShowbiz -Rapper A Boogie Wit Da Hoodie had another run-in with the law. On Saturday, September 11, the “Look Back at It” hitmaker was arrested before his scheduled performance at Wireless Festival in London.

The rapper, whose real name is Julius Dubose, was booked at Crystal Palace Park. After a video that showed the 25-year-old rapper in handcuffs surrounded by police surfaced online, a spokesperson for the Metropolitan police confirmed, “On Saturday, 11 September, a 25-year-old man was arrested at the Wireless Festival in Crystal Palace Park.”

Following his sudden arrest, A Boogie took to his Instagram Story to explain to his fans about his absence at the show. “Smh sorry to everyone who came out to see me at Wireless, London police locked me up before I went on stage for something I was accused of 2 years ago,” he wrote on Sunday, September 12. “I’m OK and I’ll try my best to make it up to you guys.” 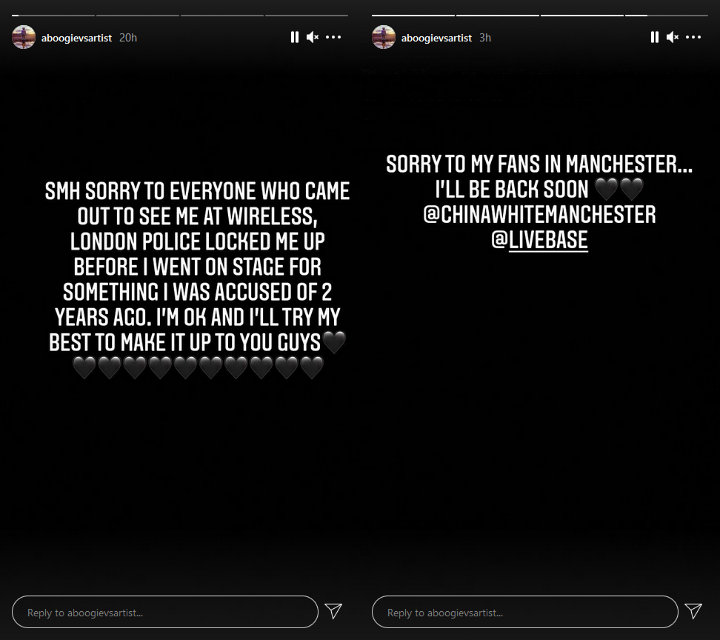 A Boogie Wit Da Hoodie broke his silence after he was arrested.

Festival organizers also posted a message announcing the musician would not be taking to the stage and they were looking at rescheduling to Sunday. The message read, “There has been an incident involving A Boogie Wit Da Hoodie. He is safe and we are working to change his set to sometime tomorrow.”

This was A Boogie’s second arrest in less than a year. Back in December 2020, the “Hoodie SZN” artist was arrested on charges of unlawful possession of a handgun and possession of marijuana.

A Boogie was sent behind bars after the authorities found and seized a Ruger .380-caliber handgun, a Glock .40-caliber handgun, an H&K 9mm handgun, and a Smith and Wesson 9mm handgun at his residence. Additionally, police secured “hollow point bullets, various high capacity magazines, marijuana, hashish oil edibles and drug paraphernalia commonly associated with the distribution of [drugs].”