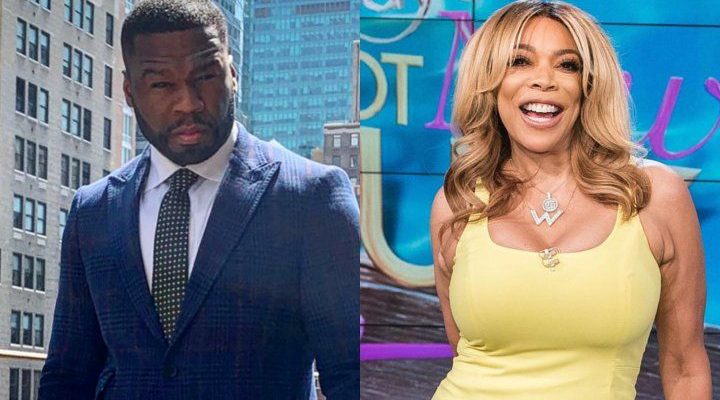 Sharing on Instagram a video of the TV personality outside his party venue, the ‘Power’ creator writes in the caption, ‘You can’t just show up to my PARTY if you been talking about me.’

AceShowbiz -Given their ongoing feud, it’s surely strange to see Wendy Williams arriving at 50 Cent‘s party on Sunday, August 18. The “In Da Club” rapper apparently thought the same and unsurprisingly would not keep his thought to himself as he took to Instagram to troll the TV personality.

Fofty shared on the photo-sharing site a video of Wendy whispering something to his son, Kevin Hunter Jr., before talking to someone who appeared to be a guard outside the party venue. In the caption of the post, the “Power” creator wrote, “You can’t just show up to my PARTY if you been talking about me. B***H wait outside.”

Even though “The Wendy Williams Show” host couldn’t get into the party venue, that didn’t stop her from taking pics outside the club. She even posted on her Instagram account a photo of her and Kevin posing with Snoop Dogg along with a caption that read, “Nothing like Uncle @snoopdogg on your 19th birthday!!”

But most of her followers already knew what happened and began trolling her as well. “Lol Why she actin like they let her in,” someone said as another joked, “She has to be in the lobby area.” One other commented, “When you cant get in but still get a pic with Snoop pre party.” There was also an individual who wrote, “Musta took these pics at the door cuz you damn sho got kicked out.” Meanwhile, one person asked, “How you hatin from outside the club lol.”

Fofty and Wendy have been feuding with each other for quite a long time. The former even previously made it clear that he doesn’t like her and would not stop trolling her as saying, “She said things about me consistently over the years and it was at points that I was not necessarily in control of the things that she was talking about and you’ll find it’s really not…”