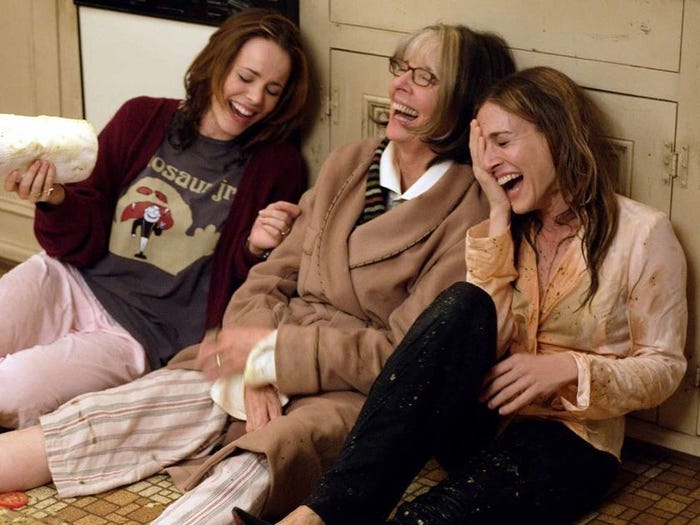 Every December, dozens of holiday movies are released, sometimes with celebrities in leading roles.

Stars like Reese Witherspoon, Sarah Jessica Parker, Dolly Parton, and Billy Ray Cyrus all jumped on this trend, starring in holiday movies about love, family, and small towns. The results are often mixed: Some of these star-studded holiday movies flop and others are deemed a passable success.

Here are 16 movies with A-list celebrities in the lead that you might have forgotten about.

Back in 1996, Dolly Parton played an angel in a made-for-TV holiday movie called "Unlikely Angel." 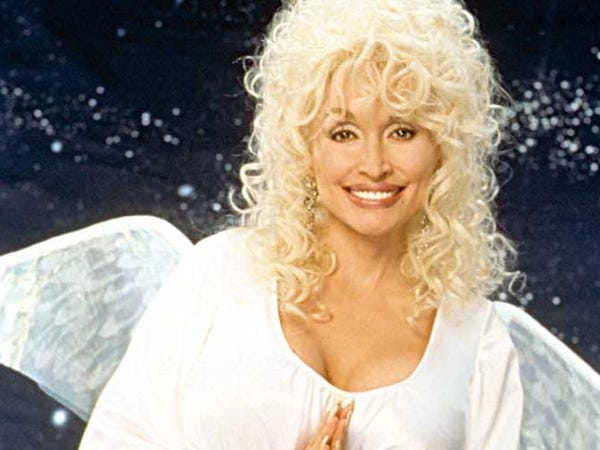 Parton plays Ruby Diamond, a self-absorbed singer who dies in a car accident one night. While in heaven, she is told she can earn her wings if she helps put a shattered family back together on Earth. Diamond dresses as a housekeeper in an undercover mission to become an angel.

"Dolly makes one very shimmering, cleavage-rich nanny, looking like a Vegas showgirl who took a wrong turn at Stateline. Talk about your unlikely angels," Variety wrote in 1996. "When the going gets tough, she pulls out the guitar and starts a-strummin'."

In 2004, Ben Affleck starred in "Surviving Christmas" with Christina Applegate, and it was one of the biggest flops of his career. 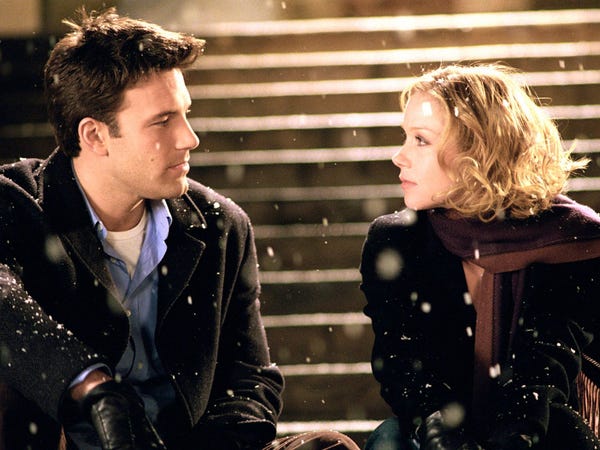 Affleck plays Drew Lathman, a powerful and rich advertising executive who pays a family to spend Christmas with him. The family includes Christina Applegate, Catherine O'Hara, and James Gandolfini.

The movie was a complete failure at the box office, earning only $4.4 million on opening weekend, according to the New York Post. Rotten Tomatoes even ranked it among the worst movies of the decade.

In 2007, Gabrielle Union starred as a single mother in "The Perfect Holiday." 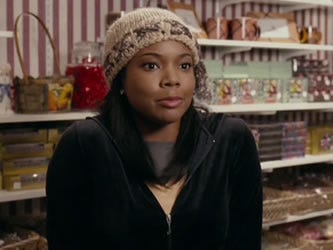 In "The Perfect Holiday," a little girl tells a mall Santa that she wants a man to fall in love with her single mother, played by Union. The movie also stars Queen Latifah.

"'The Perfect Holiday' is a big-hearted romantic comedy based on Meet Cutes…and Gabrielle Union, whose only Christmas wish is that a nice man would pay her a compliment. The movie's biggest suspension of disbelief involves Gabrielle Union having that problem," Roger Ebert wrote in 2007.

Kristin Chenoweth starred in Lifetime's "12 Men of Christmas" in 2009. 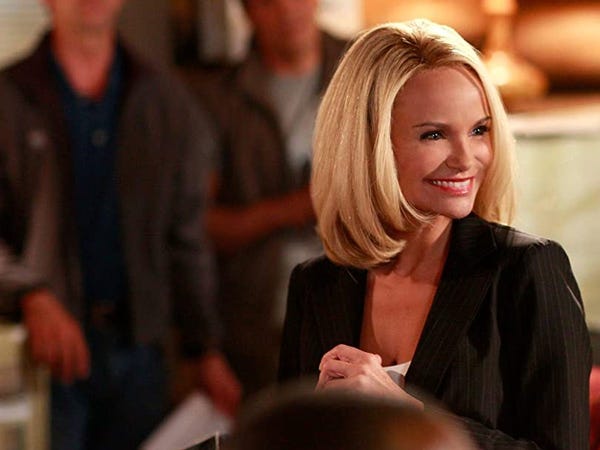 Chenoweth plays E.J. Baxter, a powerful publicist in New York. One day, she catches her fiancé having an affair with her boss, so she takes a job in Montana at the Chamber of Commerce. There she is tasked with raising money for the Kalispell Search & Rescue team, and one member really catches her eye.

"Although Broadway star Chenoweth never unleashes her golden pipes, when she sits teary-eyed and alone watching 'Miracle on 34th St.' and the Times Square ball drop, it's a reminder that with the right talent, it's possible to make even the moldiest of material sing just a little," Brian Lowry at Variety wrote in 2009. 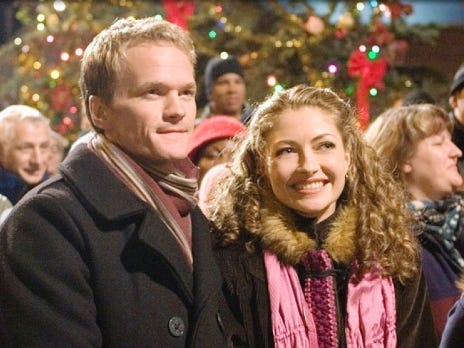 Harris' character, Nathan Andrews, is a doctor who just lost a patient on the operating table. Determined to find a new path, he returns to his hometown to spend time with his father. During that time, he meets a young boy and a woman who change his life forever.

"As for the acting, well to be honest, the characters are not that great, but all the actors have a certain likeability about them," film blog The Movie Scene wrote. "Neil Patrick Harris is well cast to play Nathan as he has such an easy-going style that you warm to him also."

Reese Witherspoon starred in "Four Christmases" in 2008 with Vince Vaughn. 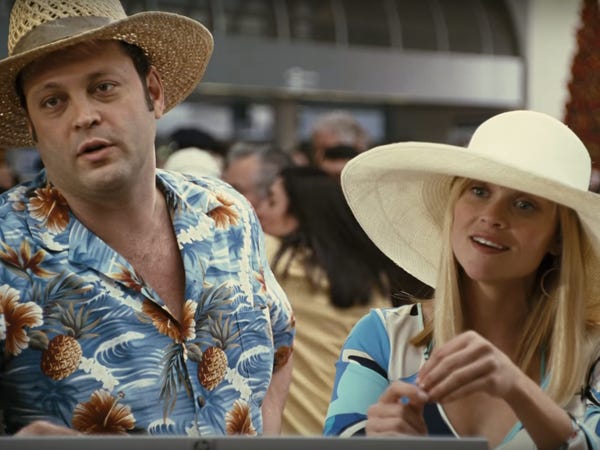 Witherspoon and Vaughn play Kate and Brad, a couple who takes a trip abroad every Christmas to avoid their families. But when a fog grounds all outbound planes in San Francisco, they are forced to spend the holidays with their four parents.

"Ms. Witherspoon serves as a game comic sidekick to the irrepressible Mr. Vaughn, who basically does what he always does, which is to stammer, bluster, and wheedle his way through a performance that scrambles the distinction between brute and wimp," A.O. Scott wrote for the New York Times in 2008. 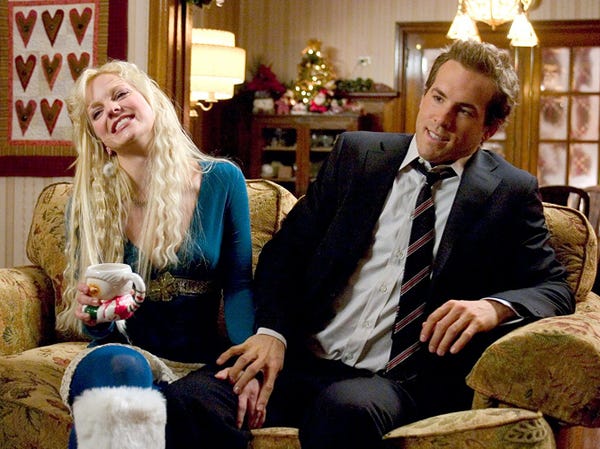 This holiday rom-com starts when Reynolds' character, Chris Brander, tells his best friend in high school that he loves her, but she wants to be just friends. After being humiliated, Brander leaves the town for college and doesn't come back. A decade later, Brander is a powerful record executive and returns to his hometown where he reconnects with his high school crush.

"The role is actually a perfect fit for Reynolds, as the dichotomy between his impossibly good looks and goofy comedic sensibility is put to good use as a formerly chubby, sensitive-type who is now a trim, successful music producer," Collider wrote in 2018.

Jennifer Hudson starred in "Black Nativity" in 2013 with Angela Bassett. 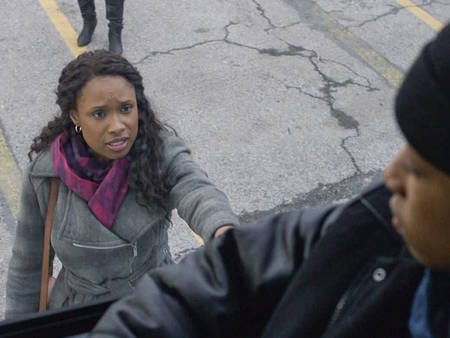 In "Black Nativity," Hudson plays a troubled, single mother who sends her son to spend the holidays with his grandparents, whom he barely knows. While there, the boy grows closer to his grandparents — played by Bassett and Forest Whitaker — and to his faith.

"Ms. Hudson is an innately warm presence who's still finding her way as an actress, but she generates so much goodwill that even when she's not letting loose that torrent of a voice, she holds your attention," Manohla Dargis wrote for the New York Times in 2013.

Before her success in "American Horror Story," Sarah Paulson starred in Lifetime's "A Christmas Wedding" in 2006. 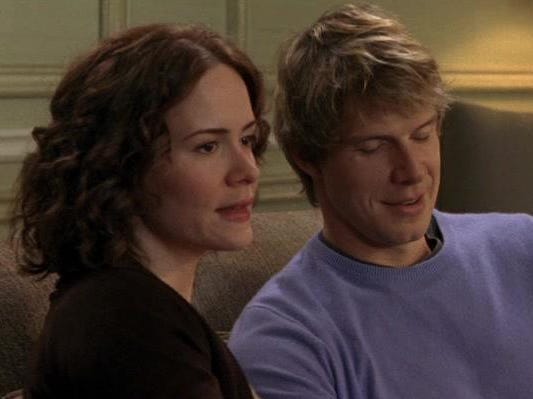 Paulson plays a bride-to-be who plans to marry her fiance on Christmas Day. When she gets called away for work, she must leave the last-minute wedding planning to her unreliable future husband (played by Eric Mabius), and it doesn't go according to plan.

"For his part, Mabius injects what could be a vanilla role with some flavor, while Paulson, who endures a series of bad wardrobe and hairstyle choices, could tone down the sweetness," Variety's Laura Fries wrote in 2006.

Debra Messing starred in "Nothing Like the Holidays" in 2008. 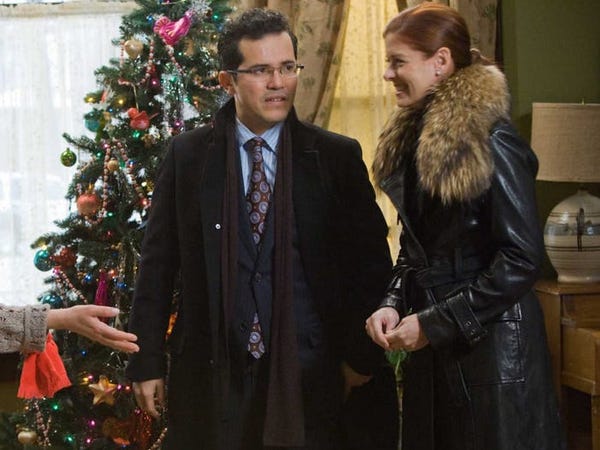 In "Nothing Like the Holidays," a Puerto Rican family in Chicago celebrates Christmas in what may be the last holiday together after the matriarch announces she wants a divorce. Messing plays Sarah, the outcast wife of the lead character.

"Sarah plays a Jewish woman who doesn't know [anyone] from this Puerto Rican Christmas," Robert Ebert wrote in 2008. "She doesn't want to look like a snob, but she's from a different background."

Before "This Is Us," Mandy Moore played a hospice nurse in Hallmark's "Christmas in Conway" in 2013. 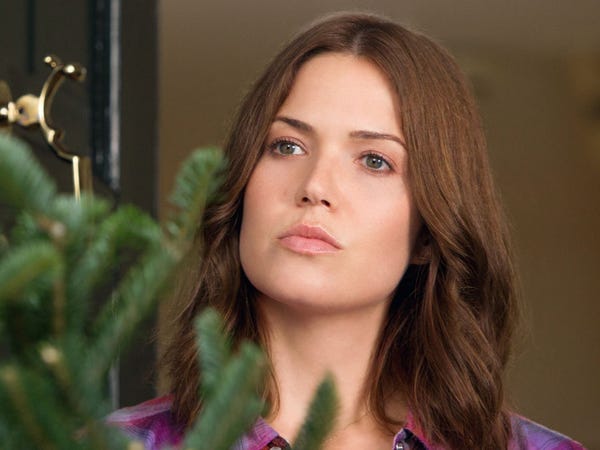 When Suzy Mayor, played by Mary-Louise Parker, leaves the hospital to die at home, she brings home a hospice nurse (played by Moore) to help with the process. But Moore and Mayor's husband butt heads along the way.

"Sappy isn't always bad, and you'd have to be a pretty heartless curmudgeon not to get a bit twinkly once the snow starts falling and Geoff Zanelli's score kicks into high gear," Brian Lowry wrote for Variety in 2013. "But 'Christmas in Conway' isn't so much a movie as an extended prelude to what could be dashed off in a holiday-themed commercial." 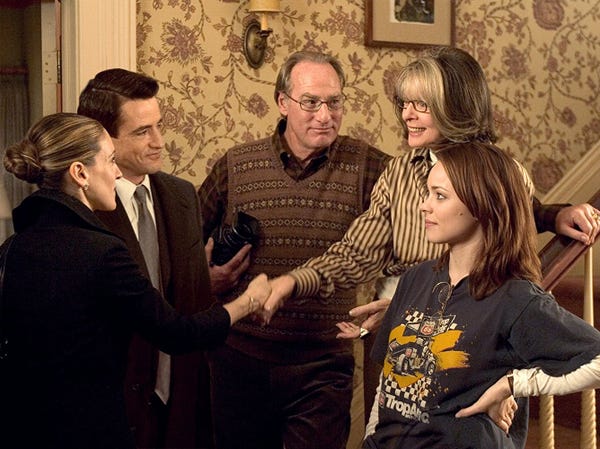 Parker plays Meredith, an uptight woman who goes to meet her fiance's family for the holidays. She doesn't fit into the loud, eccentric, and free-spirited family, and hilarity — and some partner swapping — ensues.

"'The Family Stone' is silly at times, leaning toward the screwball tradition of everyone racing around the house at the same time in a panic fueled by serial misunderstandings," Roger Ebert wrote about the film in 2005. 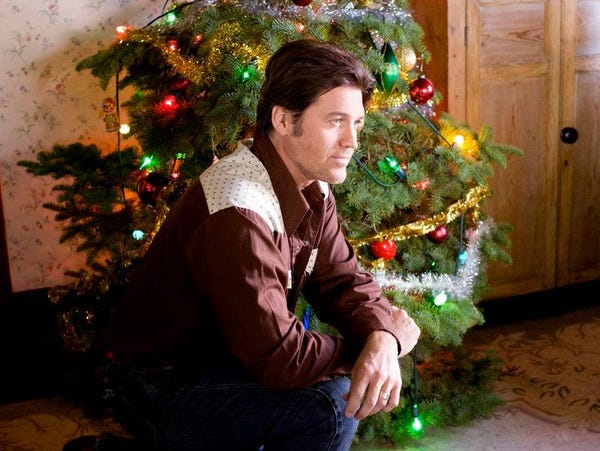 When Daniel Burton's (played by Cyrus) son gets into a fight with a Black classmate on the school bus, Burton comes up with a plan to bring the boys closer together during the holiday season. Over time, the two boys become inseparable against the 1960s Texas backdrop of racial unrest.

"Sporting a rare, cropped 'do, Cyrus (displaying better acting chops than his work on 'Hannah Montana' would have viewers believe) stars as widower Daniel Burton, struggling to raise his family and keep his farm afloat in 1960s Texas," Variety wrote in 2009.

Shannen Doherty played a thief in ABC Family's "The Christmas Caper" in 2007. 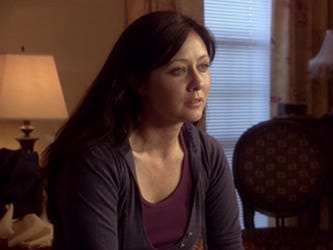 Doherty's character, Cate Dove, is a thief and criminal in "The Christmas Caper" and is described as Scrooge-like. But when one crime goes bad, she decides to lay low in her hometown in Connecticut where she begins to question her criminal lifestyle.

"This is a mediocre movie at best even with Shannen Doherty in the lead role," Red L. wrote on Rotten Tomatoes. "I guess it being a Christmas movie, the ending where everyone lives happily ever after is OK. I thought the movie would have been better if they would have developed Shannen's role a bit more." 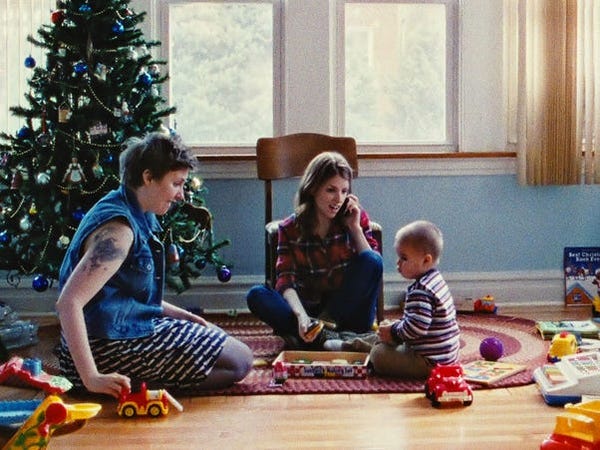 Kendrick plays loose-cannon Jenny, who moves in with her brother and his wife, Kelly (played by Melanie Lynskey), during the holidays after a breakup. During that time, Jenny and Kelly butt heads and eventually change each other's lives for the better.

In the film, the baby "upstages anything co-stars Melanie Lynskey and Anna Kendrick can come up with to generate interest onscreen, to the extent that one can imagine a greater audience for 80 minutes of 'baby Jude does the darnedest things' YouTube videos than might turn out for this sweetly insipid, mostly improvised dramedy," Variety's Peter Debruge wrote in 2014.

In 2001, Kristin Davis took a break from "Sex and the City" to star in ABC Family's "Three Days." 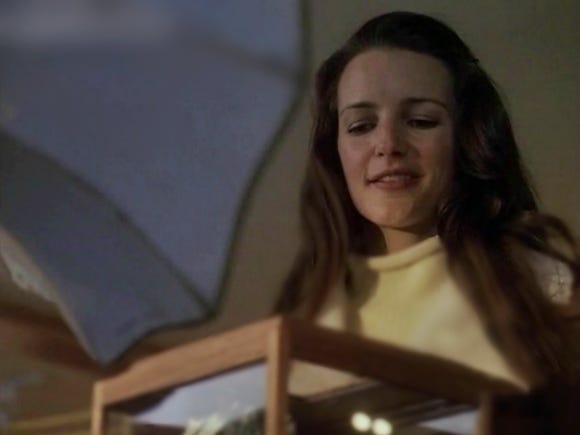 In "Three Days," Davis' character fights with her husband, Andrew Farmer (played by Reed Diamond), on Christmas Eve. She runs from the house and is hit by a car. An angel allows Farmer to relive the last three days with his wife before she is killed again.

"Diamond and Davis are fine, and actually pretty convincing as a husband and wife who are used to each other but whose spark has been extinguished," Variety's Steven Oxman wrote in 2001. "The film, though, is never convincing in regenerating that spark, no matter how desperately it tries. What we're left with is a story that always feels driven emotionally by guilt rather than love, and that's not especially cheery."