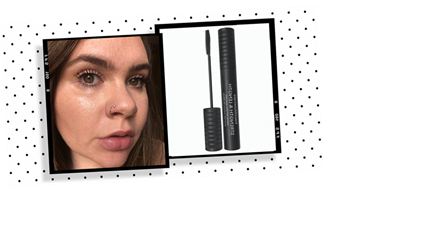 BareMinerals’ Strength and Length Serum-Infused Mascara is available from today – but how did Stylist beauty editor Lucy Partington get on when she tried it?

I love mascara, I really do, but sometimes I find the constant launches overwhelming. There are so many new ones – from Nars and Charlotte Tilbury to Huda Beauty and Hourglass – that I find it hard to keep up. Sure, they all have a point of difference and various selling points; when there’s an interesting-looking wand involved, I always take note.

That’s what happened when I was introduced to BareMinerals’ newest release: Strength & Length Serum Infused Mascara, £23. Not only does it promise longer, fuller, thicker and denser lashes in eight weeks, but it has a patent-pending paddle brush – and that’s what intrigued me the most.

On first look, the small, flat plastic wand doesn’t look like it would do much, but I was promised it had three uses: one part has bristles of different lengths, another part has tiny so-called microchannels, and finally there are even smaller bristles designed to get right into the corners of lashes without clumping. So, despite my initial hesitations, I had high hopes.

It’s not just the brush that’s worth talking about, though, because the formula is pretty impressive, too. Not only is it super black, but it’s infused with red clover flower – a peptide packed with amino acids – which helps condition the lash follicles while preventing fallout and working to maximise natural growth. That means that over time, the length and density of natural lashes will improve, which I think is pretty impressive, especially because I’ve never got into the routine of applying a lash serum at nighttime.

At this point it’s probably worth noting that I don’t tend to like mascara on first try because they’re almost always too wet, and I won’t lie, it was the same story for this one. However, I didn’t give it a fair chance – I applied it quickly (I was going out for dinner and was already running very late) and I used it after curling my lashes, which I think was my biggest mistake. The shape of the paddle brush-esque wand is actually inspired by the age-old make-up artist trick of using a spoon to lift lashes which meant adding in the extra lash curling-step gave a bit too much lift. Who’d have thought? But, despite not being fully sold, I was impressed that my lashes didn’t smudge or flake at all while I was wearing it.

My second go, however. Well, that’s when the magic truly happened. I skipped the curling and instead went straight in, using the bristled side of the wand to scoop my lashes in an upward motion. The brush glided through my lashes, depositing a thin veil of mascara on them. I repeated that motion a few times, and instead of clumping, my lashes just got longer and more evenly separated. I used the opposite side on my bottom lashes, pulling it lightly through – et voila.

The one thing I will say is that if you want added volume then this probably isn’t the mascara for you; it’s an inherently BareMinerals mascara through and through. It gives a natural effect and definitely isn’t designed for super-glam, ‘out out’ lashes (not that we’re even going out at the minute, let alone out out). Instead I’d say it’s more of an understated, daytime kinda vibe. But I’m very into it and this tube will be making its way into my everyday make-up bag.

Dry, clumpy mascara? Here's how to bring it back to life