Spider-Man: No Way Home‘s Tom Holland has revealed his body transformation as he films the third Peter Parker solo movie.

On his Instagram Stories, the actor posed shirtless with his personal trainer Duffy Gaver after their last session together.

Tom captioned the pic: “I never post shit like this but it’s our last day so f**k it. Thank you @duffygaver for making everything about this job better. Love you pal.” 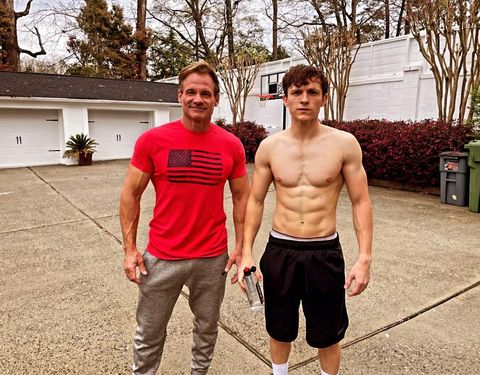 Earlier this month, Tom revealed his plans to take a break from acting after No Way Home.

“I’m gonna take a break. I’m gonna go home and just enjoy some time, you know – it’s the first time since I signed on to Spider-Man that I don’t have a contract with someone,” he told USA Today‘s Entertain This.

“I might go skiing, because that’s something I’ve not really been allowed to do, because it’s obviously a dangerous sport and I have to make sure that I’m fit and healthy and ready to work.

“I’m just gonna go home and see where the wind takes me.”

Tom’s most recent release is Cherry, which reunites the star with Avengers directors the Russo Brothers, and you can read Digital Spy’s three-star review right here.

He’ll also be seen next year in the long-awaited Uncharted movie, where he plays treasure hunter Nathan Drake.

Spider-Man: Far From Home is available now on DVD, Blu-ray and digital download. Spider-Man: No Way Home has a December 17, 2021 release date.