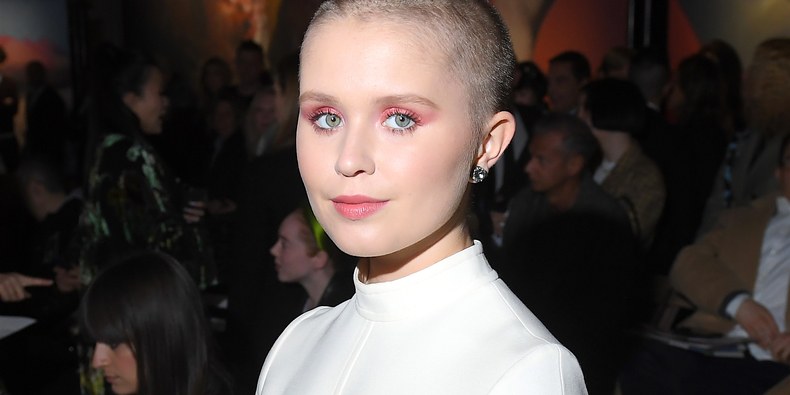 It wouldn't be a Miu Miu show without Elle Fanning, but she wasn't the only star at the label's fall/winter 2019 show during Paris Fashion Week on Tuesday. This time, she shared the spotlight (and front row) with another 20-year-old actress: Eliza Scanlen, the breakout star of HBO's hit miniseries Sharp Objects, on which she portrayed Amy Adams's character's half-sister, a troublemaking teen named Amma.

In a way, Scanlen's success is already working against her; she and Patricia Clarkson, who played the mother, gave such convincingly unsettling performances that Adams ended up considering the show to be too "dark" to return for a second season. And while it's been more than since six months since she's appeared onscreen, Scanlen clearly still knows how to steal the show. Quite unlike Fanning, who was as golden-haired as usual, complete with a yellow dress to match, she styled herself in a white T-shirt dress topped off with a glittery gold belt and pink eye shadow, paring things down to showcase her real accessory: a newly shaved head.

It's unclear if, like Kate Hudson and Cara Delevingne before her, she shaved her head for a role, though, if so, it may be for her lead role as a seriously ill teen in the upcoming Australian comedy Babyteeth. (It's hard to imagine that Greta Gerwig's adaptation of Little Women, which Scanlen is currently filming with Saoirse Ronan, Laura Dern, Timothée Chalamet, and Meryl Streep, would call for a buzz cut.) Come to think of it, it might be for the best that Sharp Objects isn't getting a second season; with yet another film with a standout cast—The Devil of All Time, costarring Tom Holland, Robert Pattinson, and Bill Skårsgard—coming down the pipeline, Scanlen's schedule is packed.

Amandla Stenberg and Killing Eve's Jodie Comer were also in attendance at Miu Miu, as Scanlen took a seat next to Fanning, Thomasin McKenzie, and Zazie Beetz. Judging from the handful of Scanlen fan accounts on Instagram, her buzz cut isn't all that new—she's had it at least since mid-February—but that by no means diminished its official debut.

Related: Sharp Objects Was Too "Dark" for Amy Adams to Consider Filming a Second Season