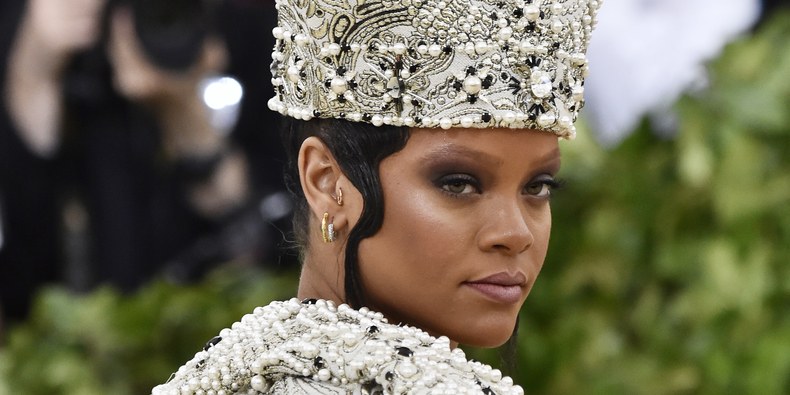 When you're Rihanna, you have full license to wear flasks as accessories, troll your fans instead of releasing new music, take wine glasses to go, and, apparently, hire people to try out wacky new beauty looks before you commit. In a recent interview with Entertainment Tonight, Damone Roberts, celebrity "brow artist," spilled the details on Rihanna's very bougie habit of testing out new makeup styles on other people first.

Roberts explained that the first time he worked with the singer, now one of his "favorite people," was ahead of this year's Met Gala, when she had the idea to lighten her eyebrows—but didn't want to dive straight into the bleaching process herself. "Rihanna's so fly that she has a lookalike model come by your space and you try out different looks on the eyebrows on the model, and you send pictures to Rihanna and she decides whether she wants to do it or not," Roberts said. "So, literally, a lookalike model—we trialed and tried and everything else until we got them perfect, and we sent Rihanna the pictures." Roberts said he didn't hear back from Rih until two days before the Met Gala, when she replied, "I loved them! You gotta fly to N.Y. and take care of me!"

The brow expert, obviously, then traveled immediately to New York to give Rihanna the bleached look that she ended up pairing with her very papal ensemble. "Of course Rihanna shut down the show! It was really, really special," Roberts said.

While she may be reluctant to go too crazy with her beauty looks without first testing them out on a stand-in, the Fenty Beauty founder is no novice to makeup application. Not only has she previously documented the (many) steps she takes to achieve a flawless "Fenty face," but, while unveiling new products at a party last fall, she also took hold of an eyeshadow palette and brush and touched up attendees' makeup herself. On second thought, however, with this new information in mind, maybe Rihanna wasn't being a generous host, but was actually using those fans as more "lookalike models" on which to test out potential new looks. Either way, it was a win for all involved.

Related: Rihanna at the Met Gala: See All Of Her Red Carpet Looks