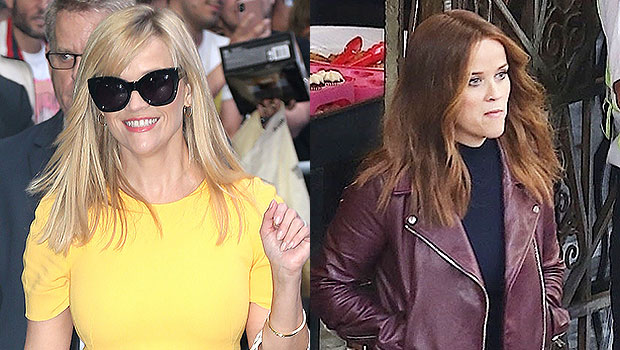 Legally blonde, no more! So many of Reese’s iconic roles have showcased her blonde locks, but now, she’s undergone a major makeover for a new show! See it below.

Who’s that girl!? We barely recognized Reese Witherspoon, 42, filming her upcoming series The Morning Show in Los Angeles on November 1. She’s a brown haired beauty! The show will be distributed by Apple, about a team of morning news anchors, and also stars Jennifer Aniston and Steve Carell. Reese donned a brown wig for this new character, which was styled in beachy, undone waves. She looks so different! She wore a maroon leather jacket and black turtleneck on the set, and we probably wouldn’t have recognized her walking past us on the street!

Reese is famous for her character Elle Woods in the Legally Blonde movies, and she recently confirmed she has signed on for a third film. She’s also blonde in her hit series Big Little Lies, which just wrapped filming on season two. But she has experimented with different hair colors for the big screen before. She was a brunette as she portrayed June Carter Cash in the 2005 movie Walk The Line. That role earned her an Academy Award for best actress. She’s nothing if not committed! But we’re pretty sure this new makeover is just a wig! Either way, she looks beautiful with the darker strands! But we will also be partial to the blonde!

This makeover same on the same day that Julia Roberts debuted light pink hair as a guest on Jimmy Kimmel Live! on Nov. 1. See more stars that have undergone hair makeovers in 2018 (ahem, Justin Bieber!) in the gallery attached above!