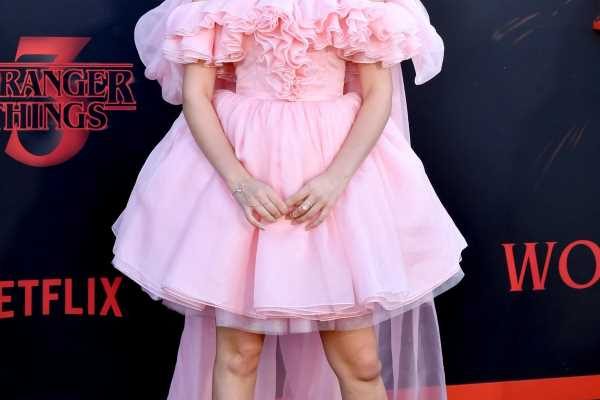 Millie Bobby Brown is a style icon. From converse on the red carpet to wearing black as a sign of protest the Stranger Things star’s style is major. Turns out that she may be getting inspiration from another celebrity. Millie Bobby Brown wore a long ponytail inspired by Ariana Grande, and she even posted the video to prove it.

On Aug. 5, Brown posted a behind the scene video from the Stranger Things premiere earlier in the summer. The actor walked the red carpet for the show’s premiere back in June wearing a voluminous pink custom Rodarte dress and white sandals. Brown’s hair was pulled back into a low and ultra-long pony tail, and while no one appeared to notice at the time, the look was apparently inspired by Brown’s friend, Ariana Grande.

Let’s be honest, if someone rocks a long pony tail, there are immediately going to be comparisons to the "Boyfriend" singer. After all, she’s known for the look, and it’s certainly become her signature over the years. While you may be thinking that Mille Bobby Brown’s ponytail isn’t necessarily inspired by Grande, think again. The actor’s behind the scenes video isn’t just a montage of her from that night, it’s a montage set to Grande’s latest song.

In the video, Brown can be seen getting ready prior to the carpet as well as enjoying moments at the premiere. One of the focuses of the video, though, seems to be that ponytail. In fact, the montage begins with a shot of Brown from behind where fans get a full-on view of her hair. From the back, she could basically pass for Grande with that pony.

While Brown’s video seems to prove that her look was inspired by her friend, it’s not the first time that fans have suspected the Stranger Things actor of channeling Grande’s look.

At the Godzilla: King of the Monsters premiere in May, Brown walked the red carpet in a romantic peachy Valentino gown (NBD, right?), but it was her hair that caught attention. Not only had the actor added tons of length to her strands, but they were pulled back in the same style ponytail that Grande is known for.

At the time, either Brown nor her hairstylist Adir Abergel who created the look mentioned that it was inspired by Ariana Grande, but given that Brown has now posted a similar look with "Boyfriend" playing in the background, the homage certainly seems more likely.

Millie Bobby Brown may channel her friends’ signature ponytail, but that doesn’t mean she doesn’t have a style of her own. In fact, it’s kind of the opposite. Brown has made headlines thanks to her unique take on fashion and style including the night of the Stranger Things premiere when she rocked her Grande-esque pony.

While Brown may have had on heeled sandals for the carpet, later that evening, she changed into some killer pink combat boots for the dance floor.

If you need more proof that Brown definitely does her own thing, just think back to the 2018 Screen Actors Guild Awards. For the red carpet, the actor rocked space buns with sweet black bows and a pair of classic Converse (which she now has a collection with).

While Millie Bobby Brown’s ponytail was an homage to Ariana Grande’s classic look, this star certainly still has her own style.