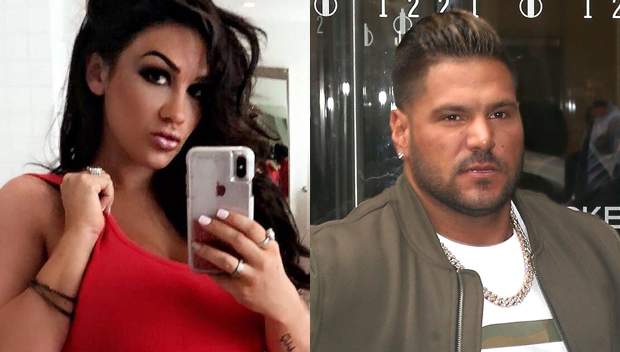 First a diamond ring, and now, hair extensions! See the pic of a newly blonde Jen Harley that has us wondering if she’s prepping for a special occasion…one that could involve Ronnie Ortiz-Magro?

Jen Harley, 31, has a whole lot of new hair. The girlfriend of Jersey Shore star Ronnie Ortiz-Magro, 32, is a full-fledged blonde now, thanks to some platinum extensions she revealed to Instagram fans on Nov. 15 — see the transformation below! It’s an interesting time to add princess hair to her mane, considering prior weeks’ events and buzz. She was photographed wearing a flashy diamond ring on Nov. 8, although sources claimed to The Blast that she’s “not engaged” and has worn the gossip-starting bling before. But Ronnie’s MTV co-star, Mike “The Situation” Sorrentino, gave us new hope as he EXCLUSIVELY spoke to HollywoodLife the next day!

“I would think Ronnie’s the next to get married,” Mike told us, just days after his Nov. 1 wedding with Lauren Sorrentino. “He was so happy at the wedding. No joke. Everyone was so surprised. Like, dude — this is making you get in the mood to get married?” Indeed, Ronnie surprised us all when he decided to bring Jen, whom he’s had a volatile history with, as his guest to the nuptials. However, Mike added that Ronnie’s “in a relationship where he wants to make it work.” Jen is also the mother to Ronnie’s seven-month-old daughter, Ariana Sky.

It looks like the play boy has followed through on making his relationship “work.” Jen revealed that she and her boyfriend are “doing good this week,” as of Nov. 12, to a Radar Online reporter. But we’re hoping Jen’s staying that optimistic after the latest episode of Jersey Shore Family Vacation, which aired on the same day Jen debuted her extensions! Ronnie repeats his old ways in the scandalous episode and invited another woman, Angelina Pivarnick’s friend Lindsay, to sleep in his bed. Oh, you know, right after they shared private time in the hot tub! We’re assuming that Jen wasn’t exactly pleased to see that play out on the small screen.

Well, we know Ronnie and Jen can work out their differences as they always do, especially since that one incident in June that landed Jen with an arrest and Ronnie in urgent care. Jen allegedly dragged Ronnie with her car during a fight, but he’s since clarified what really happened in the Nov. 1 episode of Jersey Shore Family Vacation. “They made it seem worse than it really as,” Ronnie explained to co-star Nicole “Snooki” Polizzi. “We just got in an argument over nothing. She said get out of the car, so I got out of the car, and I went to go talk to her and she drove off thinking that the door was going to shut. I held onto the door and fell, basically. Everyone just made it seem worse.” With that nightmare behind them, and new hair on Jen’s head, we hope to hear wedding bells soon!