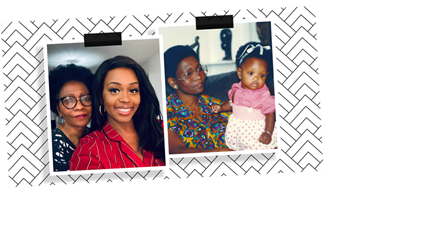 Every step of Giselle La Pompe-Moore’s entire hair journey has been experienced with her mother by her side. In celebration of World Afro Day 2020, she writes about how hair has become one of the defining bonds of their relationship.

After break-ups, career transitions and existential breakdowns, there’s always one place that I return to: sitting cross-legged on the floor in-between my mum’s legs, as she does something to my hair. The hairstyles may change and the crises may be different each and every time, but this ritual – and the safe familiarity it offers – remains a constant.

Whenever I look at my hair in the mirror, my first thoughts are always about my mum. Besides myself, she’s the one woman who has bore witness to everything my scalp has encountered from the day I was born to the present moment – and trust me, it’s encountered a whole lot. My hair has moved through many seasons of styles, processes and products and she’s the only perpetual piece in my hair routine.

Call it delusions of grandeur or healthy ambition, but since I was a child I always believed that I’d be on TV or in a magazine. I’d spend hours within the purple hued walls of my bedroom, rehearsing interviews for the day I’d inevitably be sitting on Oprah’s sofa. There was one snag in this plan, as I struggled to find anyone who had the same 4C afro hair as me doing such grand public things. I was desperate for Black role models. As I scanned teen magazines, I wanted to see afros used as tools for celebration rather than editorial costume. I wanted to see other girls whose hair thickness dictated that perfectly symmetrical pigtails were a better option than a solitary ponytail. But, I didn’t.

I wasn’t completely without a role model though, I had my mum, and for that I couldn’t be more grateful.

Like clockwork, every night she would pull out an army printed duffel bag from her wardrobe. You could mistake the heaviness for being actual military-grade weapons, but it was instead her arsenal of pink plastic hair rollers. I vicariously lived out my hair goals through watching her style her grown-up hair. I watched her nightly process of drenching her hair in Lottabody Setting Lotion; its soapy sweet smell of artificial flowers has become, to me at least, like her signature scent.

When she went into hospital for a routine hysterectomy when I was 8 years old, and instead ended up in ICU fighting for her life for three months, I’d nestle into her untouched pillows searching for that scent. It was a painful three months without her, the trauma of which has been permanently braided into my being. I missed many things during these motherless moments, but most of all I longed for her to do my hair again. Even though I hated when she did it.

I staged mini protests when I could smell the hot iron comb sweltering on the hob, knowing what was coming next. I cried when my weekend plans were thwarted and my shaven haired Barbie dolls were held hostage, tactics she employed just so she could wash my hair. I rolled my eyes when she would wake me up earlier than my white school friends had to, so she could smooth my hair back into a bun. Yet, during this time we were apart, I would have happily spent an entire afternoon with her detangling my hair, if it meant I could have her come back home to me.

Luckily she eventually did and we sprung right back into our peanut butter and jam-like relationship.

Wherever she went, I’d follow. Namely to the row of Black hair shops in Dalston, also known as the retail panacea for afro hair. I grew up in those aisles and we started by loading up our baskets with at-home relaxers that she was always nervous about applying for me. I’ve always had a shrug emoji approach to my hair and while she had zero hairdressing qualifications, I trusted her implicitly.

Once the sulphuric smell of relaxer had sufficiently lost its allure, I moved on to weaves, wigs and hair extensions. Our bus journeys to the salon were the equivalent of sitting in a therapist’s chair. She always gave me the space to untangle my thoughts about everything, from my strained relationship with my dad to worries over exam results.

We’d spend up to eight hours in the salon together, sat under the dryer with cling film wrapped around our hair and cotton wool stuffed in our ears to protect us from the heat. The years were going by but it still felt like we were making up time for those three months that we lost. When a patch of my hair decided to escape by way of stress-related alopecia, she diligently massaged oils into my hair as we watched re-runs of Sex and The City. Through our conversations, she gave me the toolkit for balancing resilience with softness as job after job became a disappointment. My hair grew back pretty quickly and I’m not sure if it was the carefully curated blend of essential oils that did the trick but I’d place a bet on it being Lystra’s love.

Before we knew it, I was suddenly 22 and packing up a suitcase to move to New York for graduate school.

As the countdown began for my departure, I decided that I wanted a wig. Common sense would suggest that I’d go to a wig-maker, but instead I sat my mum down in front of a YouTube tutorial and handed her £300 worth of hair, a needle, thread and a wig cap. We spent days laughing at videos explaining the entire wig making process in under five minutes and her stressing out that I’d be going to another country with a second rate wig. And it was during this time that she’d recite her signature haircare recipes while I typed them into the notes on my phone as quickly as I could.

The next wave of our hair journey occurred a few years and it was a big one. I was 28, going through some sort of spiritual awakening: I’d just broken up with my boyfriend of seven years, stopped taking the pill and decided I wanted to shave all of my hair off. Not for dramatic effect, but to finally chop all of my relaxer off and go natural. Again, I weighed up going to a professional but I opted for the safety of being seated in-between my mum’s legs again. Especially as the rest of my life felt so uncertain.

She was nervous and I was hyping her up as she passed the hastily pulled hair clippers through my hair. We watched my half-relaxed, half-natural strands fall to the floor as she reminded me how important it is to prioritise myself even in life’s most hectic moments.

As my natural hair grew back, so too did my deep appreciation for my roots. The roots that my mum carefully nurtured and tended to over the years. Showing me that while I may not have been reflected in the magazines and chat shows I consumed when I was younger, I would always be beautiful and loved. With every stroke of a brush and braid that she plaited, she taught me how to appreciate and look after my hair, but also about life, strength, beauty and resilience.

She recently asked if I’d finally learn how to cornrow now that my afro was in full form. Yes, I’m a Black woman, who’s 30 years old and doesn’t know how to cornrow properly. I consciously sneaked past this Black girl rite of passage, not out of laziness but because having my mum do it will always feel like home to me.

I’ll learn someday, but for now, I’m going to take in every single precious moment of sharing it with her.