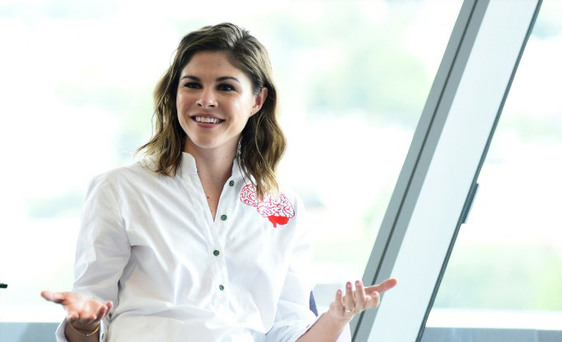 The beauty brand, which operates online nearly exclusively, raised $100m in funding last week, surpassing the $1bn valuation (it stands at $1.2bn) fulfilling the requirements for the moniker. A unicorn is a privately held start-up valued at over $1bn and includes global companies like Pinterest, Deliveroo, Reddit and Uber among its esteemed ranks; but, in the world of metaphors, Glossier was a dark horse before it became a unicorn.

It was the brainchild of Emily Weiss, its CEO, when she was working as a fashion assistant at  Vogue in New York City and she began working on a side project – her blog Into The Gloss in 2010. She noticed an opportunity to align her loyal readers with the right brands she was already featuring and monetise the brand recognition in a new, innovative way and in 2014, launched the first range of makeup products under Glossier.

At its core, Glossier is a millennial messenger, not just because of Weiss’ 33 years, but its admirable ethos along the lines of ,’You are fine just the way you are, but if you’re going to try out some cosmetics, why not look at what we have to offer?’

While L’Oréal has long been sending the message that you’re worth it, other, more nefarious businesses have made millions preying on women’s insecurities instead of empowering them. Weiss, while working at Vogue, was privy to the inside track of consumer culture and identified a niche business model that few others did. She treated her blog with the same respect as the pages of Vogue and the corresponding e-commerce site is visually pleasing and gives magazine quality imagery for digital shoppers.

As fast fashion brands use simplistic technology to shift their products online and luxury labels; digital presence is more aspirational than realistic, Glossier gives ‘normal’ women a chance to shop and feel special all the same.

Over the years, it has been a strictly digital business, rivalling stores like Sephora and makeup counters at department stores worldwide; but, like Kylie Jenner’s eponymous cosmetics line, it needed a real-life push to get it past that billion dollar hurdle.

The beauty is in its simplicity. Their business model cuts out the middle man entirely and instead of hiring agencies, the in-house team can directly identify demands and trends from their customer base. It is among the finest examples of utilising analytics available to so many businesses, but rarely executed so well.

“We are building an entirely new kind of beauty company: one that owns the distribution channel and makes customers our stakeholders,” Weiss said in a statement after announcing the company’s new value.

What’s of particular interest is its relevance to Irish customers. Glossier ships to only other seven other countries outside Ireland, including the US, Canada and the UK, making it one of the core regions into which it can take at least some credit for its success.

The Irish market is established as an exceptionally responsive one in the beauty world – for example, the Charlotte Tilbury, MAC and Armani counters in Brown Thomas are among the top three busiest in the world. Last year, the when Arnotts was brought into the Brown Thomas Group fold, the company began its investment of €25m into its digital output, supplementary to its already impressive cosmetics portfolio: a €9m Beauty Hall launched in 2014, Arnotts’ own €11m beauty floor refurbishment and the launch of the Brown Thomas Beauty Lounge in 2017.

There is also a disproportionately high number of independent businesses, either from traditional backgrounds or influencer led collections, making their mark: Lucy McPhail, a former beauty buyer at Harrods, set up Fetch Beauty in 2018; while blogger Aimee Connolly’s Sculpted range and Lisa Jordan’s LUNA by Lisa collection, have proven especially lucrative.

For many, it may seem the market is oversaturated; for others, they simply can’t get enough. Our long-standing devotion to all things beauty is reflected in the continued investment in our consumers in shopping meccas like Grafton Street, which Space NK and Urban Decay calls home.

The idea of tangoed fake tan and too-long fake eyelashes is an out-of-date cliché. The modern woman wants beauty her own way and Glossier is the proof.